State legislative seats are cheap, except where they're not 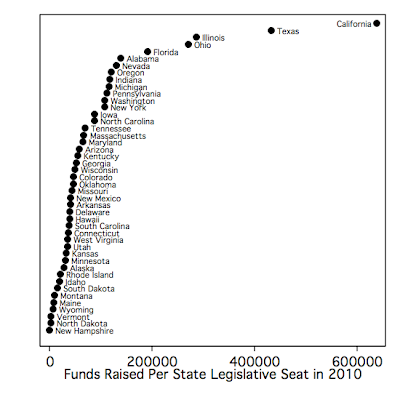 Any idea what explains variation in spending? I'm guessing size has something to do with it, but what, exactly, is the causal mechanism there? And why is New York 13th while Illinois is 3rd?

I'd guess that other factors are professionalization, careerism, and average district competitiveness or homogeneity.

Guessing more, I'd bet a very small amount that two related things are putting NY's fundraising down. First, the legislature has a right passel of members who've been there since Biblical times, and who would likely be exceedingly hard to defeat. So they don't get much high-quality opposition and don't need to fundraise as much. Second, many of the districts are very safe Democratic districts -- especially in the Senate, where the Republican gerrymander means that there's a bare majority of districts that just barely lean Republican, and a whole damn bunch of districts that are overwhelmingly Democratic.

California, say, might also have safe districts (but doesn't AFAIK have anything like the really intense gerrymander of the NY Sen), but term limits (probably) mean that people don't have the time to develop a personally safe district.

I'm surprised to see Texas so high, though, especially with the very large number of uncontested seats. I'd want to check to see whether legislators are able to convert that fundraising into money they can, one way or another, use to supplement their low pay.

California actually has very safe districts -- I'm pretty sure the number of legislative districts that have changed partisan hands over the last decade can be counted on one hand -- so competitiveness doesn't really explain that state very well.

There might be a party story in here. Legislative leaders in California raise a ton of money, which they really don't need for their own elections but they spread around to build up their parties and engender loyalty. There may be a lot of that going on in Texas, as well.

I was assuming media costs were a driving factor, but then that doesn't explain why NY is relatively low.

Right, but a district that doesn't change partisan hands isn't of necessity safe for its current occupant in the same way that a district that's been held by the same person for 30 years is. A Democrat in a district that's elected a Democrat the last 20 times in a row might still keep a war-chest on hand to defeat primary challengers that a longtime incumbent doesn't expect any more.

Texas actually raised $1.43M for each of the 55 seats with a major-party opponent.

Looking things up, Texas legislators are allowed to use campaign donations to reimburse themselves for costs of legislative service or pay for things notionally related to their service. So I expect that a lot of those campaign dollars are renting nice pads in Austin.

This chart is missing Virginia.

As Seth suggests, some of the Texas leaders are spreading around money they don't personally need for their reelection.

Speaker Joe Straus knew he was going to have a tough reelection for House Speaker The Democrats played a large role in his 2007 election to speaker and the Tea Party very much dislikes him. He raised over $5 million and donated almost $1 million of that to other GOP house candidates, perhaps in an attempt to help aid his reelection efforts for Speaker of the House.