John Sides looks at recent economic growth numbers and polling trends and concludes that "Barack Obama is on the cusp of becoming the underdog in the 2012 election." He's right, although I'll offer a few caveats. First of all, polling done more than a year before an election just doesn't have much predictive value, so I wouldn't place a whole lot of stock in that right now. Second, while the economic growth figures look really bad, Obama will, for the most part, be evaluated on the economic growth that occurs between now and the fall of 2012. That is, Obama will be held responsible for an economy that doesn't yet exist.

What will that economy look like? Well, the forecasts for growth aren't that great, and most of the forecasts we've had over the past few years have turned out to be too optimistic. And the outcome of the debt ceiling crisis will likely be at best neutral for economic growth and quite possibly negative.

All this means that the economy will probably not slip back into a recession in the next year, but economic growth will be anemic. That is, the economy may be slightly better than the one that Jimmy Carter faced during his reelection effort, but not by a whole lot. We could be looking at 1 or 2 percent annual growth.

What does this mean for Obama? Let's look at a scatterplot, shall we? 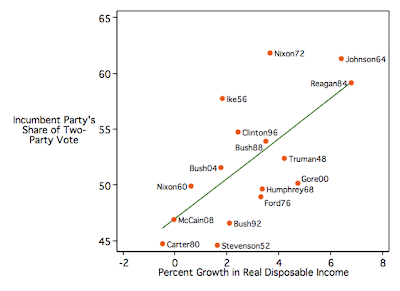 The horizontal axis above measures growth in real disposable income from the 3rd quarter of the year prior to the election to the 3rd quarter of the election year. (We're currently in the 3rd quarter of the year prior to an election.) For example, real disposable income grew by 1.8 percent prior to the 2004 election, in which George W. Bush received the narrowest reelection margin for a president in U.S. history. So it's possible for an incumbent to win during a time of mediocre economic growth, but the odds aren't great. Incumbents win 2/3rds of the time when they stand for reelection, but in the data shown above, of the six elections where RDI growth was below 2 percent, the incumbent party only won two of those. The record is 2-2 when a sitting president is up for reelection under those circumstances.

Loyal readers of this blog will note that I'm generally unimpressed with the ability of campaigns or candidate personality traits to affect election outcomes. It's not that they have no effect, just that that effect is usually paltry compared to the effects of the economy and wars. But if the economy leads us to predict a 50-50 shot for Obama next year, then smaller effects become all the more important. The ability of Obama's reelection campaign to communicate with potential voters like it did in 2008 could be pivotal, as could the identity of the Republican nominee.