The extremism of elected officials

Nate Silver has a nice post up in which he compares the ideological stances of current governors with those of the voters they represent. I don't know too much about the OnTheIssues website, which Silver uses to determine governors' moderation/extremism, but assuming they're unbiased with regards to party, the resulting analysis is quite interesting. Silver ends up producing the following scatterplot: 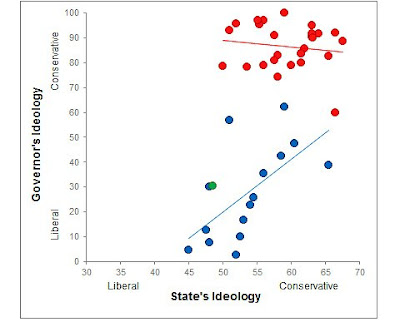 This graph reminds me a great deal of one that I produced for my book, comparing the ideal points of California legislators with the partisanship of their districts: 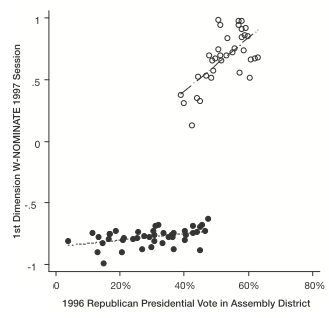 There's an important distinction here, though: in the California scatterplot, it's the Democrats who appear to be totally unresponsive to district sentiment, while Republicans actually behave more moderately when they represent more moderate voters.

One of the things Hans Noel and I argued in a recent paper was that a majority party would tend to have elected officials that were more ideologically extreme relative to their voters than the minority party would. There is an incentive, we argued, for minorities to moderate in an effort to win back control, while majorities seek to push their advantages to achieve as many of their policy preferences as possible while they're in power. If this applies to governors, as well, that's pretty interesting. After all, governors aren't really part of a national legislative chamber, so sticking together doesn't really produce an obvious policy payoff.

There are a number of reasons why the current crop of Republican governors might be more extreme than their Democratic counterparts or than Republican governors in earlier years. 2010 really was an unusual election. But what the above graphs demonstrate pretty clearly is that while the parties may be equally extreme in the long run, this extremism varies significantly by party from year to year. Sometimes Democrats really are more liberal than Republicans are conservative. Right now, it looks like the Republicans are the more extreme party.

It's not in the paper b/c it looked pretty much like the vote-only story, but we also ran it with ideal points computed both from votes and, where available, NPAT responses.

I'll try to remember to email you the working paper; remind me if I don't.

Oops -- bad memory there. When looking at voting patterns, the coefficient on district ideology for Republican legislators was positive but insignificant.

It was the common-space scores that incorporated votes and NPATs where, if anything, more conservative districts elected less conservative Republicans.

i will spend my time in this site : ksa-flh.com