I'm glad to see that John Steele Gordon's perfectly execrable "Five Myths About Millionaires" post is receiving well deserved scorn from the likes of Steven Greene and Andrew Gelman. It would be all too easy to join in the piling on. So let's get started.

First of all, I just can't leave Gordon's claim that millionaires aren't rich alone. If you're making a million annually, I totally get that you probably don't feel rich. You probably work pretty damned hard for your money. And you can easily amass a million in annual expenses through a mortgage and tuition and clothes and transportation and a bunch of other things. And you probably work with other people who make at least as much as you do, making this sort of life seem like the norm.

But you know what? It really isn't the norm. You're pulling down more than what 99% of the rest of the nation pulls down, and you're living in one of the richest nations in the history of the planet. You know what else? You could sell your nice house and buy a much less expensive one somewhere else, you could take the bus or the subway to work or buy a Hyundai, you could send your kids to public schools, you could shop at Macy's or Marshall's, etc. Yes, there might be some social costs to doing this, but the point is that you could reduce your expenses by roughly 90% and still live a very nice life with a higher standard of living than the vast majority of Americans. People making $50,000 a year really can't do that without starving.


Today, a well-invested $1 million might generate $50,000 in a combination of investment returns and interest income. That isn’t chump change, but it’s roughly equal to the 2010 median household income.

Okay, if you can earn the median household income without actually working, you just might be rich.

Oh, and I can't let this one pass, either:

Income can’t be used to predict political opinion. In 2008, for example, Obama won the votes of 60 percent of those with a family income under $50,000 and 52 percent of those earning more than than $200,000. McCain carried the middle class.

I challenge anyone to look at the exit polls from 2010 and conclude that income doesn't predict political opinion. I also challenge Gordon to explain what he means by "middle class." 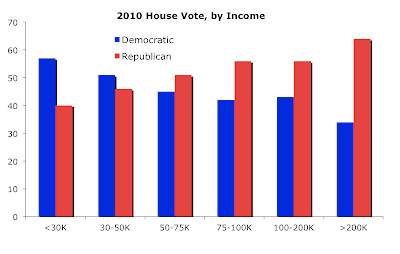 I would offer one very limited defense of Gordon: I think most people believe that income is a better predictor of voting behavior than it actually is.

So I think it's a relevant fact about American politics that no income strata of citizens gives either party less than 30% of the vote. That's descriptively important, and raises some interesting questions.

Taxes distort investment decisions. Why throw money into productive assets — corporate securities, a rental property or new employees for a small business — if the income they generate will be taxed away?

This is just so transparently wrong that it makes me question myself. I mean, if I have $1M lying around, Gordon appears to be saying that I'm going to feel better off earning 100% of the $0 that it produces sitting under a mattress rather than getting 85% of whatever it makes when invested in "productive assets." And yet I've heard this same point made by others. Am I missing something here?

Exactly, Robert. Similarly, I've never understood that whole Going Galt argument, the idea that I'd rather stay home and earn no money whatsoever than go to work and be taxed at 50%. It seems to me that you need a pretty absurdly large nest egg to be indifferent between half your salary and no salary at all.

Well, and the argument about tax INCREASES causing wholesale economic stagnation is even more attenuated. That is, it suggests that someone who is keeping 75% of his income will work like crazy, but lower it to 72% and that same person just loses the will to live. To take it one step further, the thing I heard a commentator say last week was that businesses today are not hiring because of the mere PROPOSAL of increased taxes. So, you've got a CEO somewhere who, given a recommendation to open up a new plant that will generate X million dollars more profit, says, "You know, I would do that, but there's a possibility that in fiscal year 2013 my personal income tax rate will increase by three percentage points, so I'd rather do nothing and forego the hundreds of jobs, and millions of dollars for both myself and this company."

Gordon inappropriately conflates people who makes $1,000,000 a year, who are surely is quite affluent and know it, with people who have $1,000,000 of net worth, who are often middle class. Typically someone who has an income of $1,000,000 a year will have a peak net worth in the hundreds of millions of dollars or more.

Someone who has a $1,000,000 of net worth at retirement age is decidedly middle class (keep in mind that a good share of their income will be imputed income from principle residence ownership). This is your typical heavy equipment operator or senior secretary who has received salary deductions for a 401(k) every month and invested conservatively.

Someone who has $1,000,000 of net worth at retirement age in investments alone is perhaps upper middle class, but not particularly wealthy, you are talking middle managers and pharmacists who have never been self-employed. Long term cash throw off is closer to $40,000 or less, than it is to $50,000.

Of course, someone with $1,000,000 of cash on hand in their twenties is something else all together.

Very nice write-up. I definitely love this site. Keep writing! about pharmacy one In my personal experience I might mention a book called order online viagra in this book that I mentioned have very interesting topics