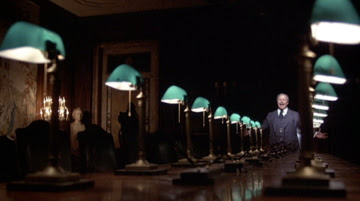 Arthur Jensen's memorable monologue in "Network" (1976) is a brilliant piece of propaganda. The vision it outlines is simultaneously Marxist, utopian, and capitalistic. It takes every anti-globalization screed you've ever heard and recasts it in a positive light. My students were dissecting it the other day, and we had some disagreements over its meaning. I was particularly focused on the conclusion of the monologue:


Our children… will live to see that perfect world in which there is no war and famine, oppression and brutality -- one vast and ecumenical holding company, for whom all men will work to serve a common profit, in which all men will hold a share of stock, all necessities provided, all anxieties tranquilized, all boredom amused.

The question I asked my students was, are we now living in the world that Jensen prophesied? It is notably not a very Jeffersonian utopia that Jensen promises. No promises of freedom or knowledge or enlightenment. But yes, war is on the decline, dictatorships are on the run, stock ownership is up, famine (at least in the U.S.) has been nearly eliminated, and thanks to Prozac and the iPhone, anxiety and boredom have been conquered.

Are we there yet? And is this as good as it gets?