I'm currently attempting to make the Corn Flake Chocolate Chip Marshmallow Cookies from the Momofuku Milk Bar's cookbook. I have to say, this is a somewhat frustrating cookbook. If you're unfamiliar with it, the Momofuku Milk Bar is a series of restaurants in New York City specializing in high-end desserts made from surprisingly pedestrian ingredients. These cookies, for example, contain Corn Flakes, powdered milk, mini-marshmallows... probably stuff you have in your pantry but never thought to put in cookies. Oh, and tons and tons of butter. But don't let the low-end ingredients fool you; the author, Christina Tosi, has a lot of fancy techniques she insists are essential (creaming butter and sugar for eight minutes, using a paddle and stand mixer rather than a hand mixer, forming the cookie dough on a tray and refrigerating it for hours, etc.). And the dishes are shockingly labor-intensive.

The book seems to assume that the reader has some familiarity with the dishes at the restaurant. There are not a lot of illustrations telling the reader, say, what the final product should look like. Anyway, I followed the cookie recipe precisely and came up with this: 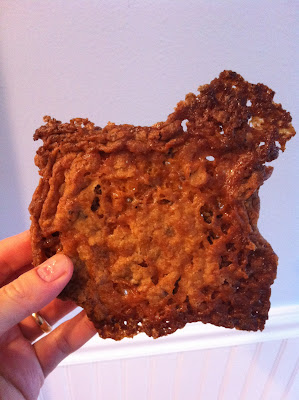 That just can't be right. And it was pretty frustrating, since I started with what was easily the best cookie dough I'd ever tasted. I tried several times and couldn't help coming up with enormous, flat cookies. I found this variation of the recipe online and followed the suggestion of freezing the dough, thinking the fridge wasn't cool enough for the cookies to hold their shape. Nope. I'm not sure what shape they're supposed to be in, but I'm pretty sure it's not the one I've got.

After a little experimentation, I've lowered the temperature to 350F, cut each dough ball in half (the original recipe called for scooping them in a 1/3 cup measure), and reduced the cooking time from 18 to 11 minutes. I tried cooking them on a baking stone, but as you really need to have them cool before removing them from the tray, the Silpat seems to work a lot better. Here's what I've got now: 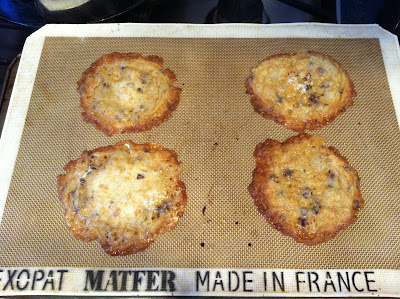 Again, given the thinness, they're still coming out more like lace cookies, but the flavor is quite good. I don't know why my cookies won't hold their shape (whatever that shape is supposed to be) -- whether I failed to whip the butter properly, whether it's an altitude thing, or what. But still, yummy.

I've also made the Crack Pie and will serve it to my guests tonight. More details later when I find out how it came out.


Update: The Crack Pie was a hit. Tastes like pecan pie without the pecans. 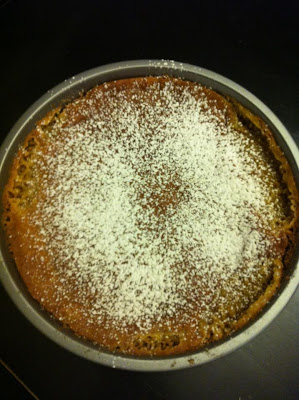 Are those cookies supposed be 8 inches in diameter or is that the way they look in the picture? They look good.

They are about 8" in diameter. I have no idea if they're supposed to be.