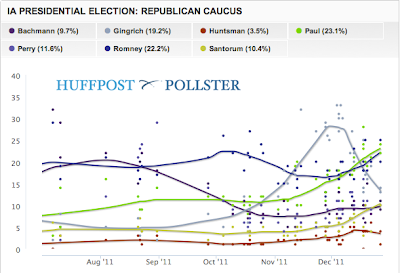 I'm teaching a class on party nominations that conveniently starts the same day as the Iowa Caucuses and ends the week of Super Tuesday. Anyone want to bet on whether the Republicans have a nominee before my class is done? Anyway, here are some important links I'll probably be using in class:

I'm with Matt Glassman in the sense that I think that it's all over but the shouting. After all the non-Romneys have had their days in the sun, who's the one actually peaking in Iowa as the actual election day approaches - Romney. I know that it's a caucus and he probably won't actually win, but I'm just saying for the guy who has been the frontrunner all along the stars seem to be aligning quite nicely.

I will take the bet and say Romney clinches the nomination (unofficially) before your class is done.

I'm guessing you're right -- his nomination will probably be a mathematical certainty by mid-March. But I'm not sure he'll have sufficient pledged delegates by then, or if he'll give an acceptance speech, or if all the other candidates will have dropped out.

Thank you so much for this Post and all the best for your future. You are really a talented person I have ever seen. I am satisfied with the arrangement of your post i think i must share here www.avg.com/retail
avg.com/retail