Dirty Harry in the Bible 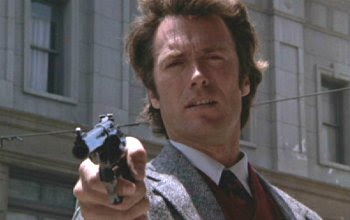 I showed "Dirty Harry" in class this week. I was surprised how dark and nasty it was. I spent a lot of time yesterday trying to convince my students that it was a deeply conservative movie. It painted society as sinful and home to a constant barrage of robberies and sex crimes. The politicians and police are impotent because they are hamstrung by the Bill of Rights. The only one who can save us from the criminals are vigilantes like Harry who can rise above the rule of law to provide justice. It's essentially the same message offered by Col. Nathan Jessup (Jack Nicholson) in "A Few Good Men," except he was the villain in that movie. It's also essentially the same message offered by Bush, Cheney, and Rumsfeld in discussing torture. I'm not sure if my message got through.

Anyway, we were looking at some stills from "Dirty Harry," and a lot of students were noticing some heavy r

eligious symbolism. There's a great scene where the killer, Scorpio, pins Harry up against a giant cross and beats him nearly to death. At another point, Harry is shown in front of a giant red, white, and blue sign that says "Jesus Saves." But we were focusing on the scene at the end of the movie when Harry throws away his badge. One of my students asked the significance of Harry's badge number, 2211. I hadn't thought about it. Then she asked if it might reference a Bible verse. So we looked up Psalm 22:11:

Do not be far from me,
for trouble is near
and there is no one to help.

That can't be a coincidence.