I'm interested in this straw poll of DailyKos readers: 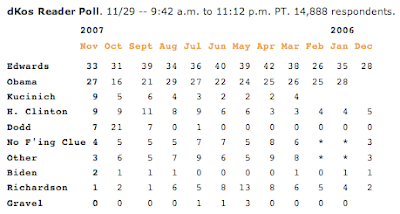 Edwards has been the resounding leader among this group for more than a year now. I'm wondering why. Is it because he's running to the left of the other viable candidates? Because he seems polished enough to actually win office? More generally, are the Kossacks more or less sophisticated/aware/strategic than early primary voters or major party insiders?

Also interesting in this straw poll is its sensitivity. Dodd had a huge surge last month when he was the only candidate from the Senate to actually, you know, use his power as a senator to rein in Bush. The rest keep talking about what they'll do once they're president, ignoring the fact that senators actually have a fair amount of power already. So the Kossacks noticed this and gave Dodd some support. Nice.

But now Obama is surging with this crowd. Why? Because of his stupid stances on Social Security or health care? That can't be it. Because he's done pretty well in the debates lately? Maybe they think he could actually win?

Also of note: Clinton is tied with Kucinich.