I attended the state Democratic convention in Colorado Springs on Saturday as a delegate. One thing that impressed me is that they actually managed to start on time, unlike most of the previous conventions I've attended this year. They seemed to accomplish this feat by seating alternates throughout the day, rather than attempting to seat alternates before conducting business. This decision definitely had its detractors -- there was one very angry man who kept shouting that they had to stop business until everyone who could be seated had been seated -- but it did allow the convention to end before midnight. 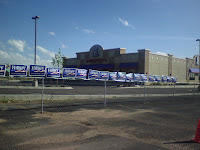 Consistent with the county and congressional district conventions I've attended, the Hillary people were clearly out in force. All the entrances to the World Arena were covered with Hillary signs, and there were drummers by the entrance chanting her name. (No, those are not the sorts of people I associate with the Clinton campaign.) So far, this sort of post-caucus organizing by the Clinton folks hasn't amounted to much, although I currently have my students examining this question. There seemed to be more Clinton signs than Obama signs at the Denver County convention and at the CD1 convention, but Obama still outpolled her 2-1 at both conventions. I'm curious how she did at the state convention -- the results still aren't up yet. My impression of the Clinton strategy is that it's too little, too late, although it was the Denver Post's impression yesterday that Clinton supporters made up "close to half of the conventioneers." That would actually be quite an impressive coup. We'll see. 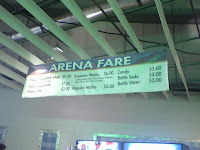 I'm pretty sure the residents of Colorado Springs saw the convention as an opportunity to kill off 10,000 of the state's most active Democrats, which was why we weren't allowed to bring our own food in and why we were forced to choose from some of the least healthful menus I've ever seen. I ended up eating a $5 bratwurst because it was literally the most healthful thing I could find. Not kidding.

I rather enjoyed the music played at the convention. The opening music was a repeating playlist consisting of exactly two songs -- John Denver's "Rocky Mountain High" and Joe Walsh's "Rocky Mountain Way" -- which I suppose are the only two popular songs that portray Colorado somewhat positively. Then they did intro music for all the speakers. Governor Ritter got the "Superman" theme, which was kinda funny, and Ed Perlmutter got "Rocky." Then, after Mark Udall's name was placed up for nomination for the U.S. Senate seat by roughly a dozen people, they played some song called "Change the World" on a loop for about 15 God damned minutes while Udall worked the floor on his way to the dais. Hey, I like Udall as much as the next guy, and I think he's got a good shot for the Senate seat, but this coronation really seemed overdone. I mean, he's not Jesus, or Obama. 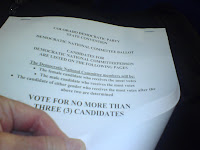 Our last activity for the day was voting -- we received a half-inch thick ballot so we could elect members of the DNC, two presidential electors, and 14 at-large national convention delegates. There were, I kid you not, over 1,500 candidates for those 14 seats. I didn't actually see all that many people campaigning for the posts over the course of the day. I'd really like to get the data on this election. The votes must be incredibly dispersed. Anyway, I couldn't even fill out all 14 names. I just voted for some people I knew, and then for some guy named Seth Harris. How could I not?

I dropped off my ballot and was actually out the door by 4pm, which surprised me. Now I'm just waiting for the results, and for that damned Udall song to get out of my head.

Thanks for posting this. The information on all the conventions over the weekend (Kansas, Nevada, Washington district caucuses) got lost in the shuffle with all the Oregon/Kentucky talk. Only Nevada has their final numbers up. And I'm pretty sure they were motivated to act quickly to make the GOP in the state look bad because of the Ron Paul ruckus at their convention.