Is it all demographics?

Now Josh Marshall has posted an excellent short essay showing how Clinton's blowout victory in West Virginia tonight -- along with her big wins in western Pennsylvania and eastern Ohio -- can be explained by Appalachia. This region, extending from upstate New York to northern Alabama, is largely populated by the descendants of Scots-Irish immigrants who were as vehemently anti-slave as they were anti-slavery. Today, the Appalachian region tends to be poorer, older, less educated, and whiter than surrounding areas, and for demographic and cultural reasons is highly likely to prefer Clinton to Obama.

I was discussing this with a colleague, who pointed out to me that the Scots-Irish have spread out from Appalachia over time into places like the Ozarks of Missouri and southeastern Colorado. Check out the caucus night results in Colorado: 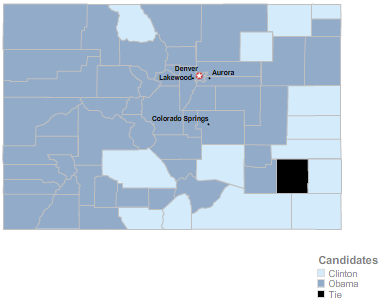 Although Obama won the state 2-1, Clinton won in the southeastern counties, where the Scots-Irish settled.

This strikes me as an under-reported phenomenon in elections. The media focus a lot on momentum and other campaign effects. After Pennsylvania, Obama was expected to not do well in Indiana because Clinton had momentum and because Obama had a spate of tough press associated with Jeremiah Wright. When he did better than expected, it was assumed he did so because he's "tough" or had somehow blunted the attacks. Or just maybe it was because Indiana is not part of Appalachia.

Just how much of these state-to-state variations (or, really, county-to-county variations) can be explained by the ethnic compositions of the local populations? If we measure this stuff right, is there any sort of campaign effect left?

See comment below in the NYT, where an Obama staffer dismisses Clinton's WVU win because the state was "demographically suited to [her]" ...

At Obama's Chicago headquarters, advisers said there was no reason to worry — West Virginia was demographically suited to Clinton and won't be part of their general election plans. It's also true that Clinton's win is unlikely to slow his march toward the nomination — Obama picked up 30 superdelegates this week, more than the 28 total pledged delegates up for grabs in West Virginia.

But maybe the Obama camp should be more worried. The voters who went against Obama Tuesday night — white, rural, older, low-income and without college degrees — don't just live in West Virginia. They live everywhere in the country, in places Obama needs to win.

Great post. I'm in the middle of doing a little analysis based on the work that you and Josh have already done and noticed that you have Saguache going for Clinton when the site http://www.coloradodems.org/coloradocaucus/ has 88.89% reporting and Obama winning 180-87.

Thanks. Not sure about the Coloradodems site, but according to MSNBC, Clinton won Saguache on caucus night 87-80.

Maybe someone had a typo?

Before this meme spreads too far, someone needs to explain why, in light of the conventional wisdom about Appalachia, the U.S. census says Scots-Irish/Scotch-Irish are wealthier and better educated than the average of the country.

A good question, Bill. This is pretty far from my area of specialty, but I think the key word in that question is "average." According to one of my colleagues, income disparity tends to be pretty high among the Scots-Irish in America, meaning that a few conspicuously wealthy individuals (John McCain?) can raise the average of a group even if the median group member is quite poor.