One problem with the turnout graph I posted earlier is that it uses the 2004 turnout rate as the baseline. Of course, some states had atypically high turnout that year because of hotly contested gubernatorial and senate races. So I've created the scatterplot below, which measures each state's turnout over the average turnout in the past three presidential elections. 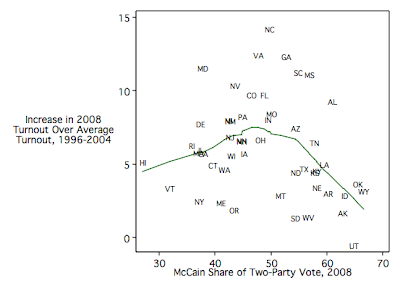 A regression analysis, incidentally, shows that the turnout increase correlates positively with the percent of the state that is African American and negatively with McCain's share of the vote. Both these variables are statistically significant at the .01 level.