Good Lord does "The Event" suck 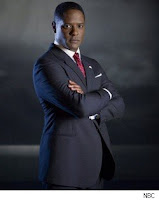 I don't know why I'm still watching this show.  It's freaking miserable.  The first episode was actually quite good.  The show started off in the middle of an airline hijacking, and each subsequent scene revealed more information about the hijacker and the pilot, to the point where it was almost disorienting to figure out who you were rooting for. But it turns out that clever editing and a slowly-revealed plot can only get you so far if the plot you're slowly revealing isn't all that interesting.

The plot is basically "X-Files" for dumb people: there are aliens among us who arrived in the 1940s, and the government is trying to cover it up, and there are evil shadowy people who will kill you if you know too much.  Seems promising, but this show manages to make it really slow and boring, and they show us each scene multiple times through flashbacks in case we weren't bored enough the first time.

I could go on and on, but really the best critiques you'll find comes from Kay Reindl's Twitter feed.  You can follow that live if you're watching the show on West coast time.  But, at least from my perspective, the most horrible parts come from the portrayal of American politics.  The president and vice president are portrayed as just two guys who happen to work in a modest-sized firm.  When the president wants to talk to the vice president, he walks over to his office, and then the VP's receptionist has to give some story about why he's unavailable.  Indeed, other than receptionists and an occasional national security advisor, there's no executive staff to speak of.  The president makes his key governing decisions while sitting in the living room with the first lady.  Oh, and the president and vice president are of different political parties.*  By comparison, the idea of space aliens living among us is quite easy to embrace.

Yes, it's low-grade sci-fi, and maybe the writers don't follow politics all that well, but how hard is it to learn such basic stuff?  This is NBC -- maybe some of the West Wing's writers are still at the commissary.  Buy one of them lunch.


*We aren't told who is a member of which party.  The president is an African American with a Latino surname who has a vacation home in Florida, suggesting he's of Cuban ancestry, and further suggesting he's Republican.  But he also explicitly forbids the use of torture on detainees, so it's hard to be sure.

It's interesting watching TV suits learn the wrong lessons from Lost. Viewers want a bunch of characters! And a mystery so they don't know what's going on! And flashbacks! LOTS of flashbacks! Not stuff like a modestly compelling story.

I totally endorse everything in this post except that Martinez is a Republican. Isn't it suggested that his vice president is a Republican? Come on, a bunch of old rich guys who are talking about the honor of the country? That doesn't ring a bell?

Cuz there are no old rich guys in the Democratic Party?

Well no but there are likely to be more old white rich guys griping about honor and the old ways of the country in the Republican Party. Also, isn't a black/hispanic politician from Florida more likely to be a Democrat than the wealthy white politician from the West? I think the VP is from Nevada (check me on that though).

I just find it more conceivable that a nonwhite anti-torture president from a potential swing state to be a Democrat than a Republican. He'd have more value among Democratic primary voters. There's also the fact that Martinez's parents aren't American. I can so clearly picture some "controversial" news channel called Phox airing accusatory segments about how Martinez isn't really an American. That would be familiar too. And yes, I'm probably overthinking this.

Lastly, since we both agree that The Event's writers are not the most politically savvy don't you think they would want to make the show seem as similar to current American politics? Is it really a coincidence that the show has an sanguine anti-torutre black president and oh yeah, President Obama falls into that category? Martinez also walks around in the first or second torture objecting to torture because he thinks his alternatives are better. That sounds a lot like Obama. Remember also that Martinez was the one interested in the "unity" ticket -bringing the country together. Bringing both sides together behind him. Sounds like Obama again.

All good points, but I just had a hard time seeing how a Cuban American could rise to prominence in Florida's Democratic Party. But I suppose that's far from the least believable thing in the show.

Agreed and I'll admit I don't know much about Florida politics. Let's just call it even and return to our mutual disdain for the show that somehow keeps us watching. Sigh.

And for what it's worth, EVERY time I see the president I think WHERE'S HIS SECRET SERVICE DETAIL?!

Things must be going pretty well in this parallel universe since President Martinez can spend a ridiculous amount of time obsessing over aliens. Have we seen him worry about the economy or foreign relations? What exactly is his presidency's agenda?

You know what? I'm just going to watch the West Wing.

I really happy found this website eventually. Really informative and inoperative, Thanks for the post and effort! Please keep sharing more such blog www.norton.com/setup

Nice blog, it's so knowledgeable, informative, and good-looking site. assignment is a great platform that has been performing astonishingly well www.avg.com/retail