Why do non-southerners still hold such a dim view of the South?

There's so much to take apart in this piece of excrement.  But just for one, is he really suggesting that Texas would have a more draconian justice system than it currently has if it were not (nominally) part of the United States? 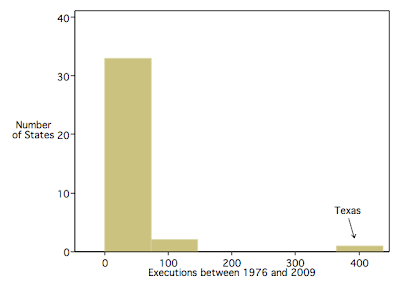 The Southern states would also probably have retained the death penalty for some subset of aggravated rape cases (something that ended only by U.S. Supreme Court fiat in the 1970s and which state legislatures actively pursued reinstating until smacked down a second time in the last year or two), and would not have per se prohibitions of the executions of juveniles and the mentally retarded (both of which exist as a result of U.S. Supreme Court rulings in the last decade).

Similarly most of the other Warren Court constitutional criminal justice rulings (e.g. Miranda, the exclusionary rule, and Gideon) would not be incorporated into Confederate criminal justice. Thus, significantly more confessions would be admissible even if coerced to a point short of torture, physical evidence obtained without a warrant or probable cause would be admissible in criminal trials, and there would be no constitutional right to counsel for indigent individuals in criminal cases although there would probably be a provision for ill paid counsel in some subset of very serious criminal cases by statute. It would also probably be harder to prevail in civil lawsuits against law enforcement officers for civil rights violations both substantively and procedurally.

Further, the constitutional provisions prohibiting racial bias in jury selection in our existing jurisprudence would not exist in the South.

I really happy found this website eventually. Really informative and inoperative, Thanks for the post and effort! Please keep sharing more such blog www.norton.com/setup

Thank you for sharing this article. It is an amazing post, I am really impressed by your post. It’s really useful www.avg.com/retail
avg.com/retail