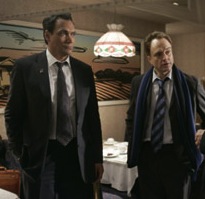 For those teaching courses on parties or campaigns, let me recommend the West Wing episode "Opposition Research" from Season 6.  The episode follows new presidential candidate Matt Santos (Jimmy Smits) during his first campaign visit to New Hampshire, under the tutelage of the more experienced but cynical Josh Lyman (Bradley Whitford).  Santos is up against two other candidates, a former vice president and the current one, who are already well known, well funded, and endorsed by many local prominent politicians.

What the episode does very nicely is depict just how important funding, activists, and endorsements are to winning a primary.  Josh spends most of the episode bringing Santos around to meet with local Democratic activists.  Santos wants to give policy speeches to thousands of people, but Josh keeps telling him how activists must be won over one by one, and that they are basically the gatekeepers -- convince one of them, and they'll send hundreds of volunteers to help you.

We also see a wonderful meeting between Josh and a state legislator, whom Josh is trying to convince to help arrange a fundraiser for Santos.  (How many political films or TV shows feature a campaign manager speaking to a state legislator? Hell, how many even show a state legislator?)  The legislator points out that the other Democratic presidential candidates have already contributed to his reelection campaign, but he hasn't seen anything from Santos yet.  "Don't make this about money," implores Josh.  "Money equals viability," replies the legislator, "and from what I can see, your boy has neither."

The episode demonstrates that voters have very little to do with the early stages of a primary election.  Rather, there are a very small number of party gatekeepers who can make or break a candidacy, and they coordinate with each other through signals like endorsements and funding.  Some very good books have been written on this subject, but West Wing will take care of you in under an hour.

Thank you for any other informative site. Where else could I get that kind of info written in such an ideal approach? I have a challenge that I'm just now working on, and I've been at the glance out for such information 8 Simple Ways To Save Money