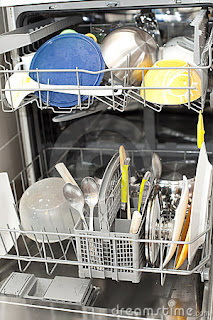 You've probably noticed by now that your dishwasher isn't working as well as it used to. Lots of people have noticed that. As you may know, this has nothing to do with your dishwasher; instead, most of the detergent manufacturers have stopped using phosphates in their soap. They did this to accommodate various state governments, which have recently banned phosphates in detergents to help avoid the buildup of algae in runoff water. Now, there are some ways to deal with the problem, such as running the washer on a deep clean cycle or using a citrus additive like Lemi-Shine or just hand-washing them. Or you can pay top dollar for old school detergent. But still, we're talking about an actual inconvenience affecting millions of American households due to government and environmentalists. Where are the Republican presidential candidates?

Some conservative activists have already started complaining about this, but unless I've missed it, not a single Republican presidential candidate has championed phosphates as a campaign issue. This seems tailor-made for Michele Bachmann, who has ridden the compact fluorescent lightbulb issue as far as it can take her. But phosphates seems like an even better issue for her. Buying expensive bulbs is certainly an inconvenience, but they actually function for something like five times longer than traditional bulbs, meaning that you probably break even on the price and might even save money. Phosphate-free detergent, however, is an inconvenience every time you run your dishwasher. This is real nanny-state stuff! No, Obama isn't directly responsible for it, but he isn't responsible for the bulb thing either (Bush signed that into law), and he didn't engineer a government takeover of health care. The details are unimportant. There's enough vague truth in there for a legitimate campaign issue. If she doesn't want it, Ron Paul should jump all over it -- today (remember remember, the fifth of November). Or maybe it can save Herman Cain.

I blogged the issue some time ago. One of the big troubling pieces of it is that it was don't in near total secrecy. Suddenly, despite the products having essentially the same labels, the product being sold was very different and no major announcement said when or why this happened - it had to be sleuthed out months after the fact.