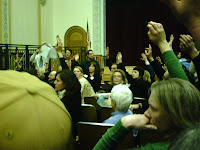 I attended my very first precinct caucus last night (actual photo at left), and I have to report that it was a delight. It was a bunch of neighbors trying to figure out who their party should nominate for president. People debated, argued about procedures, ran for party posts, gave speeches, and cheered the results. I even got elected a delegate to the county convention next month.

It's not obvious what's the best way for party members to nominate candidates. There's a fair argument to be made that the rank-and-file should have no role in that at all. But since we (with the exception of West Virginia) seem to have decided that voters will play a role in this, a neighborhood meeting in which party members deliberate seems like a nice way to do it. I'm sure the caucus system advantages some candidates (like Obama), while secret ballots seem to favor others. Also, it's potentially possible for a caucus to be manipulated by a wealthy candidate who pays a bunch of people to just show up -- that's harder to do in a primary when there are so many more people voting. But I would say that the rewards outweigh the risks. It's the good sort of social capital that Putnam and Etzioni are always talking about and Normal Rockwell loved to paint, without the bad stuff, like Italian fascism.