A friend of mine noted a few weeks back that Obama seemed to be doing best in states with either a lot of African Americans or none of them. I heard a CNN pundit saying something similar recently. So I thought I'd check it out. The results bear out the hypothesis nicely.A few interesting notes: the home-state effect is huge, assuming Arkansas counts as Clinton's home state. Also, California is really close to the trend line, suggesting that the screwy ballot that made it difficult for independents to vote in the Democratic primary didn't necessarily hurt Obama all that much. 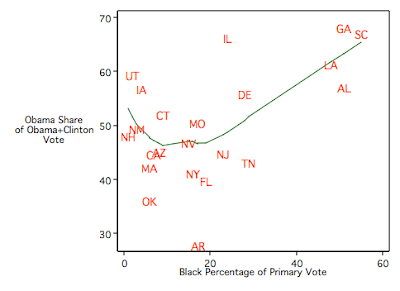 If this pattern holds, it augers well for Obama in next week's contests in Virginia, DC, and Maryland, as well as next month's contest in Texas. Ohio would tend to lean toward Clinton in the above graph, and it might help her that Governor Strickland is backing her.