I'm going to start keeping track of how the delegates shake out in Colorado's counties. As I noted yesterday, there's some talk of Clinton being more involved in the caucus states during the later stages. Even if she lost the initial caucus, there are usually several stages involved before actual DNC delegates are chosen, and Clinton could potentially pick up some delegates that way.

Not all the counties are very good about reporting their results, and several counties haven't had their conventions yet, but here's what I've got so far. For each Colorado county, I report the percent of the vote Clinton received on caucus night and the percent of delegates chosen at the county convention to represent Clinton at the state convention in May. 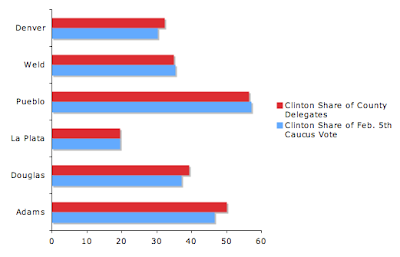 Clinton picked up a few percentage points in Denver, Douglas, and Adams counties. Those are all big urban and suburban counties in the Denver metro area. Other counties saw no real change between caucus night and the county assembly.

It's hard to know if this is all due to chance, if she really does have an effective post-caucus strategy in the urban counties, or if the Obama folks are just flakier as the process goes on. It's also hard to say just how much this will matter in the end. Each of the state's seven congressional districts will only send six or seven delegates to the DNC. So maybe she can flip two or three this way, and if she does that in the other caucus states, we're talking about serious numbers, although obviously not enough to overtake Obama in pledged delegates. Still, every little bit matters right now.

Enik:
In Pueblo and Weld, she seems to have lost a little, while La Piata is about the same. So how much of the "extra delegate share" that Senator Clinton picked up due to rounding-off benefits?

I don't think rounding off has anything to do with it. Her losses in Pueblo and Weld counties were on the order of about half a percentage point. Her gains in Denver, Douglas, and Adams counties were two to three percentage points each. All things being equal, it wouldn't be surprising to see a little fluctuation in the numbers between the caucus percentages and the county delegates. Sometimes delegates get sick, they forget the convention date, etc. However, the movement so far has been largely in her favor.

OK, now I see - there are far more state convention delegates than the final national delegates from Colorado, where some rounding-off is presumably likely.
You are on top of this, but I just saw this post on dailykos about Senator Obama gaining county delegates in Eagle County:
http://www.dailykos.com/comments/
2008/3/11/05659/3925/404#c404

Thanks for the tip on Eagle County! I'd missed that one.