How a state goes from red to blue 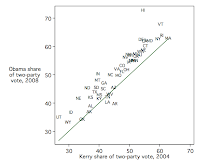 One of the thing that surprised me about the graph on the left (see more on this here, here, and here) was that Colorado appeared fairly unremarkable. The average increase in the Democratic vote between 2004 and 2008 across all states was 5.85 points. Colorado was right near the mean with a Democratic vote surge of 5.79 points.

This surprised me because Colorado has been identified (along with Virginia) as one of the states whose political terrain is shifting leftward most quickly. The Centennial State was considered a pretty reliable Republican vote in presidential elections for many years. And then suddenly the Dems pick up a Senate seat and take over both state houses in 2004, and then they take the governor's mansion in 2006, and then they vote for Obama for president and Udall for Senate in 2008.

The story that pundits and observers (including me) have been telling is one of interstate migration. Liberal left-coasters who can't afford housing in LA, SF, or Seattle are moving to the Denver area, driving the state further to the left. Yet the election returns don't support that story. Colorado just voted more Democratic like the rest of the country, because its voters were angry at Bush and scared about the economy.

The graph below is a scatterplot of the 2004 and 2008 Democratic presidential vote shares among Colorado counties. The diagonal line is the 2004 baseline. 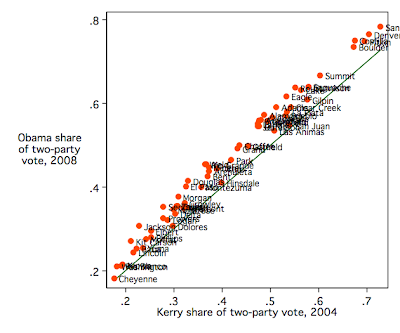 Each county moved an average of 5.25 points in the Democratic direction. The regression has an R-squared of .98, meaning if you just had taken each county's 2004 Democratic vote share and added 5.25 to it, you could have come really close to predicting how it was going to vote this year.

That said, there are slight differences among counties. Notably, the more liberal counties shifted slightly more leftward than the more conservative counties did. I looked to see if the fastest growing counties had shifted more, testing the idea that it was liberals migrating to Colorado who caused this shift, but no, that didn't seem to matter. Nor did the percentage of the county that was African American.

Here's something interesting: the presence of an Obama campaign office seemed to make a difference. Amazingly, the Obama campaign had offices in 27 of Colorado's 64 counties -- a serious investment of capital. As the boxplot below suggests, they got a good return on the investment: the Democrats surged comparatively more in those counties where Obama had set up a shop: 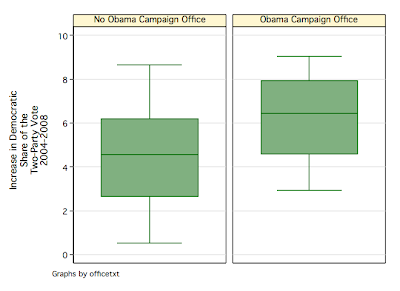 A regression analysis shows the presence of an Obama office to be a statistically significant predictor of the increase in Democratic vote share, associated with a 1.8-point increase in the Democratic vote for president. However, it's conflated somewhat with the ideology of the county: the Obama campaign chose to set up shop in more liberal counties. Even with the Kerry vote in the regression equation, though, the Obama office variable is still statistically significant at the .05 level.

Update: In the comments at Monkey Cage, Andrew Gelman has been questioning my honor due to my use of a boxplot. So here's the same graph only done more like a scatterplot. Maybe this is better? 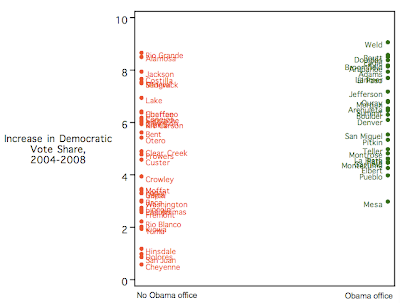 I hope this is true. It would be nice to think this has all happened because people change their minds, rather than their locations.

park had an obama office, I cant find it on your chart. Is it there?

Yeah, Park's in there. It got kinda stuck under La Plata.