One of my graduate school mentors suggested that it was good for scholars to make predictions. It involves a little bit of risk by having us put our presumed knowledge of political events up for public scrutiny. We're required to actually think about stuff and put our ideas out there. There will always be random events that affect elections, but political scientists should be able to get pretty close in their predictions.

With that in mind, here's what I'm guessing will happen.

Way back on August 1st, I predicted that Obama would get 52.3% of the two-party vote, with McCain getting the remaining 47.7%. This still strikes me as pretty reasonable. Yes, there's a fair amount of polling evidence out there suggesting that Obama will win by considerably more, but I've found more often than not that my early predictions tend to be closer to the truth than the ones I make up just before the election, so I'm sticking with that. I'm guessing that Nader, Barr, and others pull roughly equally from the two major parties. So the final vote share will be Obama getting around 51 and McCain getting around 47. 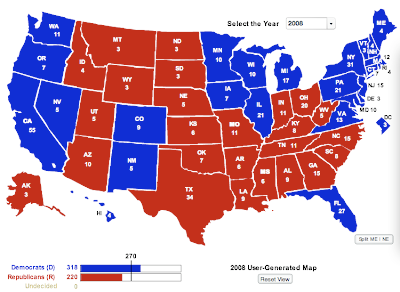 If I were drawing it again today, I might reverse Ohio and Florida, or maybe give both to Obama. But I'll stick with this, giving Obama 318 EVs to McCain's 220.

I'll concede that I haven't paid enough attention to House and Senate races. Still, just from what I've been able to read, I'll guess that the Democrats pick up 20 House seats and 7 Senate seats, including Alaska's.

Dems will hold onto the Colorado state House and Senate. The personhood amendment will fail. The Earth will continue to revolve around the sun and men will continue to act goofy in the presence of women.