Here's the comparison of the state-by-state presidential vote between 2000 and 2004, as depicted by Andrew Gelman:

Pretty stable. How a state voted in one election almost perfectly predicted how it would vote in the next. 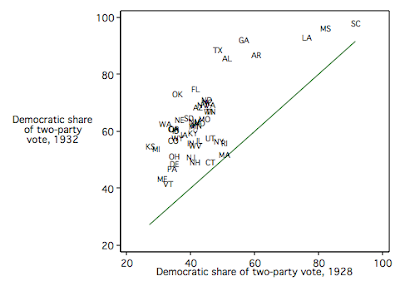 Okay, that's really different. All this just goes to show that 1932 was a critical election. There was a substantial shift in partisan voting patterns. But I was surprised to see just how much of that shift was concentrated in the South. In 1928, southern states voted more Democratic than the rest of the states, but with significant variance. Al Smith did really well in South Carolina but only barely won Alabama and actually lost Texas. Go forward to 1932, and all the deep South plus Texas voted overwhelmingly -- and similarly -- for FDR.

My interpretation of this is that both the economic and race dimensions were important to southern voters. They usually stuck with the Democrats due to the race dimension (i.e.: they were still mad at Lincoln), but they'd sometimes lean a bit Republican if they were happy with the economy under Republican presidents. Come 1932, there was no longer any cross-pressure. If you were angry about the economy and fearful of blacks, the Democratic Party was suddenly the place to be!