I was talking with a friend yesterday about the new Pew survey that studies generation gaps. One interesting thing that this poll does is to ask people their favorite musicians and break them down by age group. That yields this odd finding:
I'd say the last two are unsurprising. It was interesting to see Michael Jackson as the top choice of the under-30 set, since he did his most influential and popular work before these folks were even in kindergarten. But we can probably dismiss this since the poll was conducted a month after Michael Jackson's death. No doubt excessive media coverage influenced that finding.
It was also odd to see the Eagles as the top group among my generation. Don't get me wrong -- I love them. But I just don't know that many people for whom the Eagles are the shiznit.
We get a bit of an explanation if we look further down into the poll. They didn't just ask people who their favorite band was. They asked what musical performers they "like a lot." So you could like a lot of different acts. Among the 50-64 and 65+ age groups, there was much greater consensus on their favorites, with 65% and 64%, respectively, picking the top acts. The second place acts were 11 points behind them. Among the 30-49 set, the Eagles were only liked a lot by 54%, with Michael Jackson in second place at 44%. And Michael could top the under-30 group with just 46% liking him a lot.
Here's a visual example, showing the ranks of the top performers among the youngest (16-29) and oldest (65+) age groups. Note how much sharper the dropoff is among the older cohort. They have their favorite (Sinatra), and the others quickly fall off. The younger age group has a much flatter distribution, suggestion a broader range of favorites but less of an obvious coordination point. 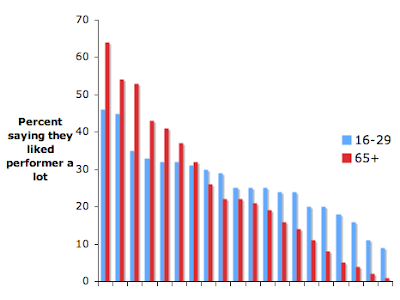 This could mean that musical tastes are just more diverse among younger Americans. Or perhaps the passage of time tends to force a coordination point as less popular acts don't really get played over and over again the way the Beatles and the Stones do. Let's check this poll again in 30 years.

WTF, Seth? Much more appropriate is "Don't get me wrong -- against my better judgment, I sang along to "Peaceful Easy Feeling" in the car the other day."

Look, I'm not saying they're the best band ever. But don't be bagging on them. You can learn pretty much everything you need to know about American culture from "The Last Resort" and "The Sad Café."

I'm with John here...I'm not sure which is more disturbing: Seth's comments about the Eagles, or that I ran into a friend of my oldest kid (10th grade) in the library today, and he was checking out a Rush album. The world's gone mad, I tell you.

"world's gone mad. . ."? Hey, take it easy. All I gotta say is that if I saw a friend of my son listening to a Rush album, we'd have a fifth seat at the dinner table that night ("So, Eli, what's your favorite Neil Peart drum solo?").

This only increases my suspicions that age is the most bullshit of all demographic measures. I bet whether you get a London or LA act as an answer, rather than a Motown or Nashville one, depends more on geographic region, ethnicity or income, than age.

Also, I dare you to listen to Rufus Thomas' "The Funky Chicken" sometime and tell me it's not the Ur-Primus tune.

You're probably right, Lidzville, and this is testable! But we need Pew's data.