Why are seniors opposing health reform?

I've seen this mentioned in numerous places. It looks like the older you are, the less likely you are to favor some sort of health reform. Note Andrew Gelman's nice graph:

The usual interpretation is that it has something to do with interests. Seniors already have government-funded health care and they are distrustful of the idea of extending it to others, thinking it will happen at their expense. But I think there's a much simpler answer: older people are more conservative than younger people: 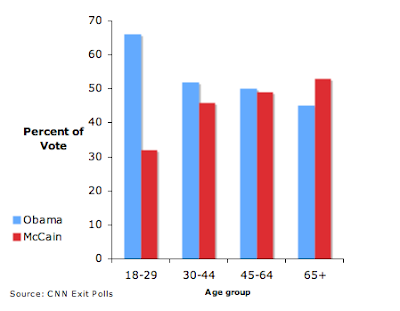 Sure, partisanship has something to do with interest, but it's far from the whole story. And I'm more likely to believe that people favor or oppose a bill because of their partisan predispositions than because of the policy substance of the legislation.
Update: Ah, it appears Ezra Klein and I park our cars in the same garage:

Seniors are also the most conservative segment of the population and are getting more so. They constitute not only the sole age group that Obama lost in last year's election, but also the sole age group in which his results were worse than those of John Kerry in 2004. And both Obama and Kerry underperformed Al Gore's 2000 results.

"The Roosevelt seniors are being replaced by the Reagan seniors," says Paul Begala, who helped run Clinton's 1992 campaign. A May poll by the Pew Research Center found that for the first time in 20 years, the GOP is now an older party than the Democrats.

But taken as a whole, the attitudes seniors express on health care are arguably the greatest vote of confidence anyone has offered reform. Seniors live in America's version of Canada. They have single-payer health care. And they love it. They love it so much that they've got the chairman of the RNC swearing to protect it.

The other day, Huckabee made a comment that "Ted Kennedy would have been urged to die under Obamacare".

How big of an impact do you think these fear variables, such as "death panels" are making on the seniors' opposition toward healthcare reform? Is it a huge impact, or very small?

Huckabee's comments were ill-informed, inappropriate, and just plain wrong. That said, I'm not sure how much talk of "death panels" and other things are influencing seniors. My impression is that this sort of talk is providing a rallying point for opposition to health reform, but it's rallying people who didn't support Obama and weren't likely to support his health reform plans anyway. That's not nothing -- an organized minority is more powerful than a disorganized one, but it's still a minority.