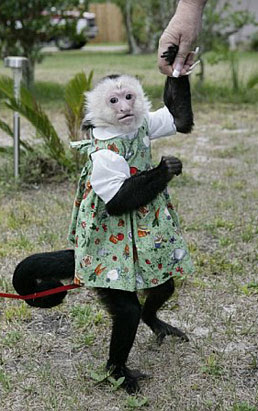 I watched about three minutes of "My Monkey Baby" on TLC last night and can easily say it was about the sickest thing I've seen all year. This is a show about people who adopt monkeys, not really as pets so much as surrogate children. They dress them up, sleep next to them, refer to them as their kids, etc. And the best part, as one of the "moms" said, is that these children won't grow up and move away.
The particularly jarring segment I saw was when a couple went to a breeder to buy their new baby monkey. This baby was taken out of a large cage it shared with its parents and given to its new human owners. The people were amused at the fact that the monkey parents didn't seem particularly nice.
Let's just review that for a second. This was an infant monkey living with its parents. We're not talking about dogs or cats, who plop out a dozen of babies at a time. We're talking about primates who have one child at a time and nurture it throughout its young life. The infant was taken away from its parents and given to some humans who just felt they needed a monkey in their lives.
I have sympathy for people who somehow feel so lost or lonely that they need to have a baby monkey in their lives. But I'm pretty sure they need treatment, not a monkey.

as a reader, i really feel like i get it all here at enik rising.

Yeah, Curious George was a documentary, turns out. My uncle adopted a young rhesus monkey from a lab in the seventies. It was going to be destroyed. He lived with it in a Brooklyn apt when it was little, and by all accounts they lived together well, in an Oscar and Felix sort of way. But he very quickly donated it to a wild game park when it matured. "It was like living with a seven year old who could do a 30-foot standing broad jump." These people are insane.

"But I'm pretty sure they need treatment, not a monkey."

Or a show on TLC.

Are you sure that this is a human with the monkey in the photo? That does not look like a healthy human hand...