Via Sullivan and Edge of the American West, here's a wonderful 1927 map of California produced by Paramount Studios, suggesting filming locations throughout the state that looked convincingly enough like other parts of the world. 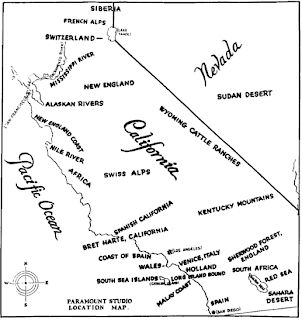 I'm sorry to see that, at least as of 1927, the studios weren't yet pushing the versatile Topanga Canyon Malibu Creek State Park as a shooting location.  It would later serve as Korea in "M*A*S*H," both Africa and Virginia in "Roots," and (spoiler alert) future Earth in "Planet of the Apes."  Topanga Canyon Malibu Creek State Park is the Meryl Streep of filming locations.

I remember riding on horseback in Malibu Creek State Park, through the aftermath of the M*A*S*H set, and swiping a piece of thatch from one of the hut roofs. Didn't know they used Topanga Canyon as well. Great map!

Nope, you were right. I had my geography screwed up. Thanks for the help.

That park was also Hazard County.