My old colleague Tom Knecht notes some recent public opinion data on the war in Afghanistan in his paper "Benchmarks in Foreign Policy Opinion," which he recently presented at the Midwest Political Science Association.  My favorite figure: 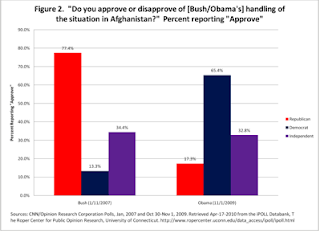 Basically, asking someone their evaluation of the war in Afghanistan is tantamount to asking them their party identification.  If you're of the same party as the president, you're okay with it.  If not, you're not.  Of course, it isn't a perfect mirror -- Republican support for the war under Bush was more than ten points higher than it is among Democrats under Obama.  This, however, is surely reflective of the substantial chunk of the Democratic electorate that is fundamentally anti-war no matter who the president is, and not an evaluation of the president's actual prosecution of the war.

It's good, but it's not perfect...policy has actually changed a fair amount, IMO. And of course one could legitimately believe that Bush was good at managing the policy and Obama wasn't, or vice versa.

IOW, I'm 100% certain that your interpretation is correct, but it's not actually a logical certainty.