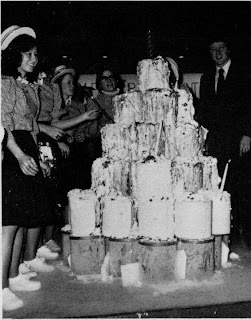 The above photo comes from a 1978 Farrell's Ice Cream newsletter.  The gentleman at right is Arkansas' then-Attorney General Bill Clinton, about to win an ice cream eating contest.  According to the newsletter,


Farrell’s at McCain Mall in N. Little rock, Arkansas celebrated George Washington’s birthday this year by building a giant birthday sundae. The festivities began on February 20 with an ice cream eating contest between Arkansas’ Attorney General, Bill Clinton, and Sonny Victory and Deanna Scott of KLAZ-98 radio station. And the winner was Bill Clinton, who reached the bottom of his Pig’s Trough first.

Next came the construction of the sundae with strawberry topping, cherries and lots of whipped cream. As everyone sang “Happy Birthday to George,” Bill Clinton blew out the candles and presented the first serving to John Waddle, Arkansas’ Muscular Dystrophy poster child. Free ice cream was served to all guests attending the celebration. Donations were accepted and all proceeds went to the Muscular Dystrophy Association.