Over at 538, Tom Schaller says the Republicans made a smart choice in situating their 2012 nominating convention in Tampa, Florida.  After all, Florida is the largest swing state, and the Tampa area is very much in play.  He then adds,


Anyone who remembers the 2008 crowds in Denver for Barack Obama’s acceptance speech at Invesco Field in August and at another huge rally in late October would be hard pressed to make the case that picking Denver had no effect on Obama’s eventual, 9-point victory in Colorado.

Well, I was at both those events, and I'll make that case.  Remember the scatterplot comparing the Kerry 2004 vote to the Obama 2008 vote?  Here it is: 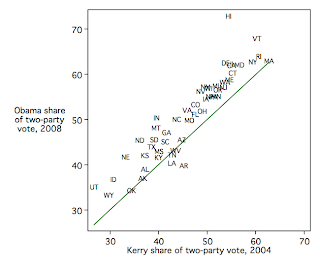 Yes, Obama did notably better in Colorado than Kerry did four years earlier, but he did better just about everywhere.  The average state swing toward the Democrats in 2008 was 5.85 points.  The swing in Colorado was 5.79 -- right near the mean.
Okay, maybe it didn't matter statewide, but maybe in Denver?  Again, not really.  The Democratic swing from 2004 to 2008 in Denver was 6.1 points, not much bigger than the state or national means.
There are some campaign activities that do seem to be associated with vote boosts for candidates, but generally such campaign effects are pretty short-lived.  Conventions are associated with short term boosts for candidates, but since they occur two months before the election, it's hard to find much influence on the vote.

Agreed. Conventions don't do much to bolster vote totals in the states where the conventions are held. But that calculation hasn't seemed to matter much to the RNC of late; at least in terms of their site selection.

No Republican presidential candidate has won the state of the GOP convention since Bush won Texas in 1992 (The convention was in Houston.). Of San Diego, Philly, New York and Minneapolis, Philly was likely the wisest choice ahead of the 2000 cycle.

If the goal is to win the state in which you've placed your convention, then the GOP has camped in a lot of blue states. Tampa (and Florida) seem like the best site since Philly. No, that isn't the same metric you're using here, Seth, but I'd wager the GOP isn't looking to just shift votes, but to win the Sunshine state as well in 2012.