Journalistic trends both awesome and terrible

If you care about campaign journalism, I've got good news and bad news for you.

Let's start with the bad news. That would be Kathleen Parker's latest column about Rick Perry. Excerpt:


The same things that drove liberals mad about George W. will repeat themselves with Perry. It’s that certitude mixed with bravado. It is also, dare I say, their certain brand of manliness. Weathered, creased and comfortable in jeans, they convey a regular guyness that everyday Americans relate to. Take it or leave it, it happens to be true.

Please just kill me. I can handle the stuff about candidate personality and pop psychology, I can handle the outlandish claims about fundraising and advertisements tipping elections, but I feel like if I have to go through another whole election cycle filled with this sort of gender-stereotyping, regular-guyness, Americans-can-relate-to-him-because-he-jogs-with-a-gun-and-never-rethinks-anything, my-schoolgirl-crushes-correlate-with-American-voting-behavior-at-1.0 kind of crap, I'm just going to snap. Quick reminder, Ms. Parker: W. lost the popular vote to an egghead in 2000, barely beat another egghead in 2004 despite being a very manly commander-in-chief during a war, and left office with an approval rating in the 20s. Even if Americans can relate to such "regular guyness" -- a dubious proposition -- there's about zero evidence that matters politically.

Luckily, there is a decidedly good development in campaign journalism pulling me back from the abyss. A few weeks back, political scientist Hans Noel challenged journalists to try covering the party aspect of nominations rather than the candidates themselves. Mark Blumenthal has decided to do exactly that, conducting a survey of party elites (or what he calls the "power outsiders") in Iowa, New Hampshire and South Carolina. The survey questions are pretty limited so far, but this approach has the potential to yield some very useful information about how the party picks its nominee -- a lot more useful than information about Michele Bachmann confusing Elvis' birthday with the anniversary of his death, entertaining though that may be.

For some other encouraging coverage along these lines, check out this piece by Jay Cost and Nate Silver's recent post that features this awesome Venn diagram: 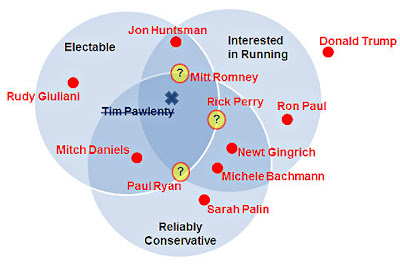 Kudos to Cost, Silver, and Blumenthal, and to Hans for saving the universe.

i like this one because seth really lets his emotions fly. it's rare to see him really ticked off. at least on the page.
and i agree. the real-american, jo lunchbucket type characterizations seem to diminish all of us. analysts, academics, curious political junkies, and the "working class" they're trying to depict.

scuze me, i'm going to the bathroom to gag myself. don't come get me until this phenomena has ceased