Here are the two most important graphs for understanding the state of the 2012 Republican presidential nomination contest. First, the endorsements derby, as of 9/20: 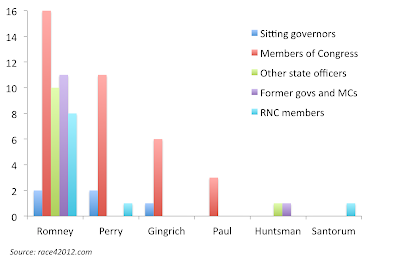 The lesson here, of course, is that Romney is way ahead in collecting insider endorsements. And endorsements, as we know, do a much better job predicting who will get the nomination than money, polls, or anything else.

Okay, now the second graph (via Mark Blumenthal), which provides vital context for the first: 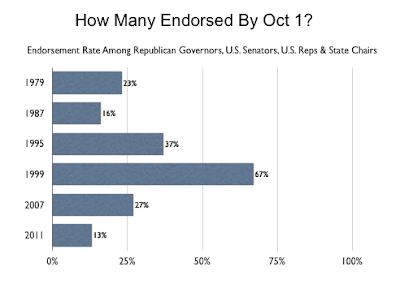 The lesson here is that very, very few insiders have endorsed yet. They're waiting. Which means that Romney most definitely does not have this thing sewn up. There's still plenty of time before Iowa for insiders to pick a different candidate and rally behind him or her.

That said, it's hard to say just what exactly the insiders are waiting for. The field is set. Several potentially good candidates have decided to sit this one out. So insiders can go with Romney or they can pick from the others who we saw on stage this week at the debate, and that pretty much means Perry. And we already know about as much about Perry as we're going to know. He's a lousy debater and he's probably going to stay that way. He's a bit off the party message on immigration and vaccinations but is otherwise pretty reliably conservative. Meanwhile, the economy will probably continue grow at a weak pace but probably not go back into a recession, leaving Obama vulnerable but not automatically toast. The information just won't get much better than that. What more do they want to know?

1) It's only been a couple of weeks since it absolutely became too late for other candidates (some might even see a tiny window now), so I can see the logic of waiting and then it taking a while to get around to it, coordinate announcements, etc. And just human nature, like procrastinating on cleaning out the cat box.

2) If you fear that Romney will inevitably win the nomination despite not being liked at all by the base -- or by you -- what's the incentive to endorse?

Even if you want to have an endorsement on record to curry favor with the nominee, etc, why not wait 'til the last second just in case Romney somehow flames out, gets hit by a bus, or whatever. If something happens, you don't have that now embarassing endorsement to explain away.

In response to that, it seems to me that while there is a risk in endorsing early, there is also potential reward. That is, if Romney ultimately becomes President, he will think most fondly of those who gave their endorsements now when it could actually make a difference, and not later when the nomination becomes inevitable and everyone is jumping on the bandwagon.

I'd agree with Robert. People get remembered for backing someone early. Also, a potential endorser might want to endorse to help prevent a more freakish scenario. For example, what if Cain wins Iowa? Yes, the party insiders could scramble at that point to rally around Romney, but it would be easier to prevent such a thing by acting early.

Seth, is it plausible to assume that the reason in 1999 that 67% of endorsements were wrapped up was because President Clinton had been in power for 6+ years and that Republicans were champing at the bit for a chance to get back in the White House?

In 1987 and 2007, there was a Republican President who had been in office nearly seven years, and maybe there was some anxiety or "incumbency fatigue" because of a troubling economic climate (the 1987 Stock Market Crash/the Housing Crash).

Metrichead, yes, time out of office likely has something to do with it. Cohen et al have a nice chart (reproduced here showing that parties that have been out of power longer tend to nominate more moderate people for president. Similarly, I would expect that a party has a somewhat easier time uniting on a nominee the longer they're out of power. The demands for ideological purity are softened somewhat as a party gets hungrier for power. Conversely, there are a number of folks within the GOP right now who figure 2008 was a fluke election and that they shouldn't need to compromise to win office.

I figure this is still at least a three way race. No non-Romney who is still viably in the running has a decisive lead, and Perry's stock is falling like a brick.

In a wide open race to be the not Romney, Cain has as good a shot as Perry or the next guy.