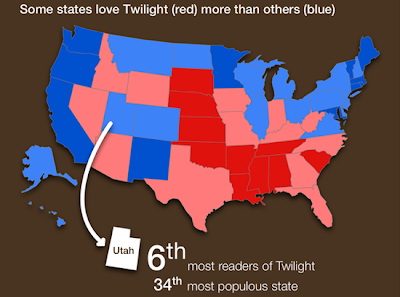 The mysteries presented are twofold:

The second one is easy: the author, Stephenie Meyer, is Mormon, and a graduate of BYU. I can only assume that there's been a disproportionate share of buzz about her in Salt Lake City. Still, it's curious that Utah departs from the partisan trend; she has so many readers, but most of them dislike the book.

The first one is trickier. What can account for Republicans liking the book so much more than Democrats do, other than, as Erik Loomis says, "Republicans having horrendous taste in literature"?

Actually, we don't know that. This is a classic case of ecological inference fallacy. It is certainly possible that Republicans like the book more than Democrats do, but the map can be deceiving. The people in these states who vote in presidential elections may not be the ones who register opinions on Goodreads. Indeed, a goodly number of "Twilight" readers are probably under 18.

The only way we can really test the partisan connection is to examine individual level data, and Goodreads (regrettably) does not collect data on party ID. Still, there might be a way to infer party ID from Goodreads profiles, perhaps by looking for hints of political preferences in the "about me" section. If Gary King or some other enterprising individual would like to work on this, have at it.

I am a Republican, and I have never, ever, ever, never read one of her books nor seen any of the movies. How's that for possible outlier status? :)

If I sent you one for Christmas, would you read it and provide me your honest evaluation?

Finally found a book series that I downright refuse to celebrate with cake.

Call me when you can predict party from whether someone wants the girl to end up with the vampire or the werewolf.

Seth, are you serious?

Seth, I have the whole set and have read it all at least twice, I'm happy to run it across town.

The answers to both questions are pretty straightforward.

The Utah anomaly has to do with discomfort at the very strong Mormon resonances in a book where the characters aren't behaving like good Mormons. The books are sort of a reverse dog whistle. They have also sorts of symbols that can be cringeworthy for Mormons yet off the radar screen of everyone else. For example, the recurring motif of pale as beautiful and vampires as glittering in the sun and angelic taps into a strain of Mormon iconography that was disavowed when the mainstream denomination finally disavowed its doctrine that African-Americans were racially inferior, an uncomfortable memory for those who remember it. The connection of Native Americans to the series is likewise very much tapping into the Mormon zeitgeist.

The red state-blue state piece makes sense because the Twilight books are violently anti-feminist (a key trope of the whole series is that heroine Bella persists in loving someone who tells her he is a danger to her and whose relationship with her leaves her regularly suffering domestic violence-like injuries, being stalked and getting pregnant young despite her mother's high hopes for her), and Breaking Dawn, which is just hitting theaters now, is very fervantly pro-life. For peolpe who are culturally blue state, this stuff is forbidden fruit.

Also, while "correlation is not causation" is a mantra in the social sciences world, it is also the case that correlation does not happen without a cause. The cause may of a correlation may not be a X causes Y, but there is almost always some pretty good reason that X and Y are correlated to each other in a statistically significant way. It may be X causes Y, it may be Y causes X, it may be Z causes X and Y, or X causes Z that causes Y, but coincidence is almost never the source of a strong correlation.

I kind of co-wrote a book on this! [with Andrew Gelman, Dave Park, and Jeronimo Cortinea) :)

See, Boris, if you'd have entitled it "Red State, Undead State," it would have sold much better.

But yes, I should have mentioned it in the post.