Game Theory and "Children of Men" 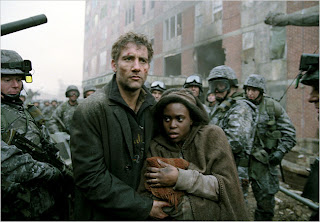 There are actually a number of good cinematic depictions of game theory. The ferry boat scene from "Dark Knight" (2008) is one for the ages, although I find Cyrus' speech at the beginning of "The Warriors" (1979) to be a really nice depiction of a prisoner's dilemma.

I teach "Children of Men" (2006) as part of my politics and film class, and I find that game theory is a useful framework for it. Specifically, there's an aspect of game theory that suggests that it's usually in one's interest not to cooperate with others as long as you're playing a one-time game. If you give the game multiple iterations, though, suddenly reputation becomes important. It hurts you in the long run if other players think you're going to just steal from them, so you start to cooperate with them. And this is basically why people are more or less civil to each other -- because they have to deal with each other tomorrow and the day after that.

"Children of Men" asks what would happen if we took the future out of this game. It posits a not-too-distant future world in which humanity is slowly dying out. No child has been born in 18 years. Suddenly, reputation doesn't matter, because humanity is on its last legs. How do people act once life is no longer an iterative game?

The film provides a pretty negative answer. Society is breaking down at a fundamental level around the world. Terrorism and war have caused most nations to crumble. The only country with a vaguely functional society is Great Britain, and it functions through the use of an increasingly brutal police force that spends much of its time rounding up illegal immigrants from failed countries and housing them in concentration camps. Even within Britain, society is fragmented and terrorism is considered a part of daily life.

A recurring theme in the film is animals. The main character, Theo (Clive Owen), is often greeted kindly by dogs and cats. A pivotal scene occurs in a barn with dozens of cows. Another key scene (left) occurs at the Battersea Power Station, the building on the cover of Pink Floyd's "Animals" album (1977). (You can even see the pig!)

My impression of this theme is that it refers to the State of Nature. The social contract has failed, and we are now at that awful human condition in which no one can trust anyone else.

So, my game plan to be less than civil to most people is a winning one? Good. I'm going to alert the co-workers and the wife.

I'd say you're well positioned for the apocalypse.