The predictive power of off-year elections

John Sides had an excellent and concise post last week cautioning us against over-interpreting the results of yesterday's elections or seeing them as predictive of elections in 2010 and 2012. The pundits, of course, ignored him, but it was nice to read the post anyway.

While I certainly endorse what Sides said, I should note a new article by Tom Brunell and David Smith forthcoming in LSQ. As the authors note: 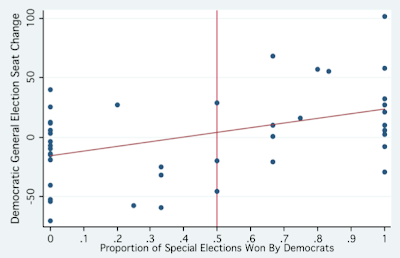 I still think the facets of the NY-23 race are too peculiar to lead us to expect Democratic victories for 2010. Still, the research is suggestive. Maybe we should cut the pundits some slack.