There's an interesting sub-literature out there investigating the question of how responsive state governments are of the wishes of their citizens. Erikson, Wright, and McIver (1993) found some nice evidence along these lines suggesting that we actually do get the government we want. States with liberal populations tend to get governments pushing liberal policies. Given all the intermediaries between citizens and their government, this is a pretty encouraging finding.

Jeff Lax and Justin Phillips have a very cool new paper examining this question in greater detail. They basically confirm the Erikson et al finding, but also note that some state governments are better at representing their citizens than others. As the authors argue,

there is a large “democratic deﬁcit”— states are only successful at matching policy with opinion majorities about half of the time, and clear majority support is often insufﬁcient for policy adoption. We ﬁnd that certain political institutions, speciﬁcally legislative professionalization and term limits, enhance the opinion-policy linkage. Other factors, such as participation, electoral competition, and state culture, explain little. 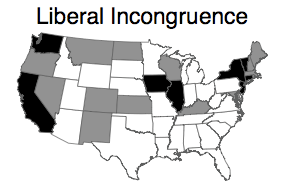 I'm wondering how much of this can be explained by party strength. Iowa, California, New York, New Jersey, etc., all have pretty strong political parties, and they might be pushing legislators toward policies that are more liberal than their voters are comfortable with. Southern states, though, aren't really known for their strong party organizations, so why are they producing out-of-step conservative policies? It's possible that there's a political culture argument here, even though the authors only find modest culture effects. A lot of southern governments are designed to be non-responsive. That is, they have short legislative sessions, weak governors, and other institutional rules (set up right after Reconstruction!) that make them resilient to shifts in public opinion.

Lax and Phillips have one other fun little finding in there:

As another way of picking up cultural differences, we tried a proxy (a long shot) for a state’s populist tendencies—the presidential vote share of William Jennings Bryan against William McKinley in 1896. A populist tradition could directly impact responsiveness or have shaped institutional development. Rather surprisingly, we ﬁnd that there is a signiﬁcant increase in the marginal effect of opinion for states with a higher Bryan vote. While not huge, the effect is signiﬁcant and non-negligible.

How cool is that?