I'm just updating my old chart of annual average temperatures in the United States from 1895-2008.  Yeah, 2008 was relatively cool, but don't lose the steaming forest for the cold tree. 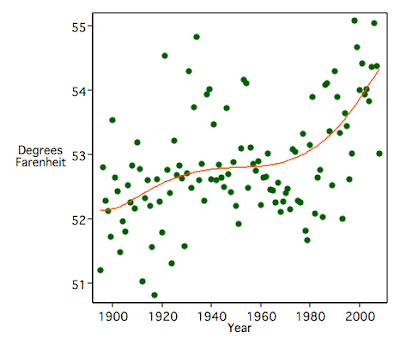 You can make that chart in under five minutes using Stata and downloading the data from the National Climatic Data Center.  They actually have their own graph generator, but the result is shockingly ugly: 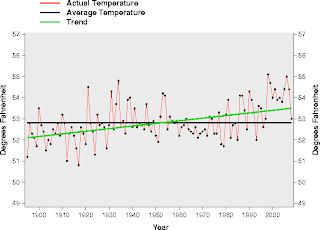 I mean, you can sort of detect the trend, and you can see that the last decade was relatively hot, but all those red lines connecting the dots are meaningless, and it really doesn't give you a sense of the magnitude of the shift since the mid-20th century.

I'mma take off all a my clothes.

Al Gore is fat and has a big house thus negating all of your facts and science.

If you want something amusing but that may make your ears bleed check this out,
http://www.youtube.com/watch?v=5sjiDlfB40E

and yes the lead singer is dressed as Cartman...

Have you got the source code for that? I'm trying to do exactly the same charts for a bunch of weather stations in the UK, but my loess plots are going screwy.

Sure. The two variables were "year" and "tempf."

It would be more legible if you used "Number of Pirates" to label the data points.

This is really interesting post, You're a very skilled blogger. Also, I've shared your site in my social networks! @ Packers and Movers Ahmedabad