Fred Brown had a column in yesterday's Denver Post arguing that Democrats are still looking good in Colorado.

Despite their president's many problems, despite the angry town hall meetings, the poisonous partisanship in Congress, the Tea Party movement and the "birther" billboards, Democrats continue to gain numbers in Colorado.

Since August, in fact — the month of those town hall near-riots — Colorado Democrats have managed to gain slightly each month. There are currently about 10,000 more of them than Republicans.

Let's look at the numbers, shall we? If you look at the total number of registered voters, there's remarkable stability over the past few months. And yes, the Democrats are maintaining a marginal advantage, although unaffiliated voters outnumber those of both parties. 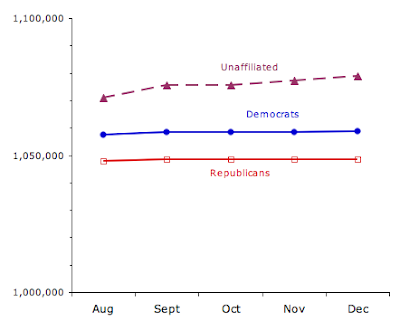 But look at the breakdown among active voters (defined as those who voted in the most recent November election): 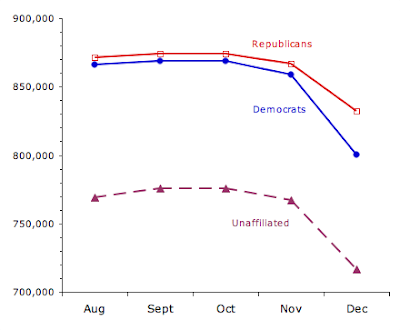 Most notable is the dropoff in December. This is due to the re-calculation of "active" status after November's election. Far fewer people voted this November than last November. What's also notable is that Republicans have maintained an advantage among active voters, even coming off 2008. And that advantage grew after last month's election, demonstrating that far more Republicans than Democrats turned out last month.
I don't know how incredibly meaningful any of this is. If voter registration determined electoral victories, Democrats nationwide would have held the presidency from 1932 to the present day. (Indeed, Brown reminds us that Republicans outnumbered Democrats by 165,000 voters in November of 2006, the month that the Democrats took over the governor's mansion.) Meanwhile, within Colorado, the number of unaffiliated active voters is roughly 25 times the size of the difference between the two major parties' active registrants. So these stats shouldn't be particularly comforting to either party.
But let me quibble with one of Brown's claims:

In such an evenly split political environment, candidates are wise to avoid the "wedge" issues. Strong positions on abortion, immigration, guns and gay marriage might fire up the fervid bases, right and left, but they turn off the moderate middle.

I think there's a misunderstanding of wedge issues here. Brown seems to be describing wedge issues as stances that your base likes but moderate voters detest. But that's not really what they are. As Sunshine Hillygus and Todd Shields explain in The Persuadable Voter, a wedge issue is one that keeps your coalition together but pulls over a few voters from the other side. And sometimes campaigns approach these issues in a very targeted manner. An evenly split political environment is precisely the environment in which wedge issues are employed. These issues won't work as well in an environment (like 2008) in which everyone is focused on just one issue (the economy), but when different groups of voters care about different sets of issues, it's possible for a campaign to pick apart the opposing campaign's coalition through the use of wedge issues.