Much has been and is still being written about Colorado's rapid shift from a red to a blue state. Journalist Adam Schrager and former state Rep. Rob Witwer have a new book coming out on this very topic. (I'll have a review up in the near future.) As an explanation for this shift, they argue that campaign finance reforms hampered both parties, but Democrats figured out a way around the reforms first:

In hindsight, what Colorado Democrats did was as simple as it was effective. First, they built a robust network of nonprofit entities to replace the Colorado Democratic party, which had been rendered obsolete by campaign-finance reform. Second, they raised historic amounts of money from large donors to fund these entities. Third, they developed a consistent, topical message. Fourth, and most important, they put aside their policy differences to focus on the common goal of winning elections. As former Democratic house majority leader Alice Madden later said, “It’s not rocket science.”

The idea that a party can re-assert itself amid reforms designed to kill it intrigues me to no end, and I'm trying to investigate just whether and how this occurred in Colorado. Those who've looked into the question end up focusing on the Gang of Four, a collection of wealthy liberals who donate to candidates and causes. The four consist of Rutt Bridges, Tim Gill, Jared Polis, and Pat Stryker. At least prior to Polis' election to Congress in the 2nd district, all of them were private citizens who nonetheless played a large role in funding Democratic causes and affecting who represented Coloradans in Congress and in the state legislature.

I'm just starting to investigate this group, but here's a network look at the Gang's donation patterns in Democratic state and federal primaries since 2006. The recipient candidates appear as red circles. I've limited the graph to those candidates who received donations from at least two of the Gang's members: 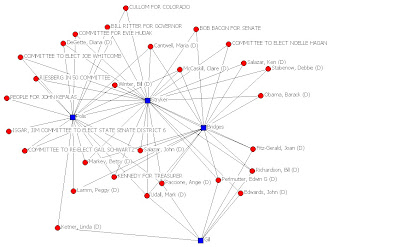 Probably the first impression is that these folks are good at picking winners. They backed Betsy Markey, Cary Kennedy, Ed Perlmutter, Mark Udall, Angie Paccione, etc. -- pretty much only people who prevailed in the Democratic primaries. Although there are a few exceptions. Notably, they backed Peggy Lamm, who would ultimately lose to Ed Perlmutter. And three of them backed Joan Fitz-Gerald for Congress. The one who didn't -- Polis -- would end up defeating her in the primary.

Anyway, it's still hard at this point to figure out just how crucial the Gang's support was for these various candidates to prevail in primaries. I'll turn to that next....