My kids' elementary school has pictures and letters from President and Mrs. Obama on display in the hallway. The one from the First Lady is nice, and even seems a bit personalized. The one from the president is pretty weak, though. 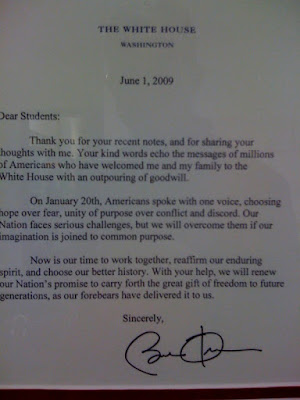 It starts with "Dear Students." No attempt to personalize the address line. Okay, that's fine, the White House is getting millions of letters from schools. I get that. But the sucky part is the second paragraph:

On January 20th, Americans spoke with one voice, choosing hope over fear, unity of purpose over conflict and discord.

How exactly did Americans speak with one voice on January 20th? They didn't. Language like that usually refers to elections, when Americans speak through their votes. That whole line sounds like it was originally on campaign letterhead and referred to November 4th of 2008.

Having worked in the White House Correspondence Office, I totally get that they're overwhelmed, particularly in the first few weeks, and just need some simple language to get a response out the door. And, in a pinch, they probably borrowed some campaign language, which I think we did in the early days of the Clinton administration. But they needed to do a bit better than this, especially since this response went out in June. The language above doesn't even make sense, and I'm not sure why kids need to hear it.