Why all party scholars should see "Gangs of New York" 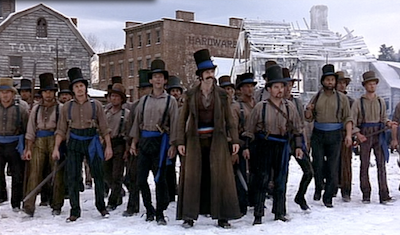 I just showed Scorsese's "Gangs of New York" (2002) in my parties class. I've now seen it roughly half a dozen times, and every time I watch it I catch something new that screams important lessons about political parties. Yes, it's a brutally violent film, but it's worth getting through that to learn its lessons.

The movie spans a party regime cycle. At its beginning in 1846, the New York neighborhood known as the Five Points is neatly polarized between the Nativists, led by Bill "the Butcher" Cutting (Daniel Day Lewis), and a collection of Irish Catholic immigrant gangs, led by Priest Vallon (Liam Neeson) and his Dead Rabbits. This polarization comes to a quick end in a street battle that leaves Vallon defeated. Cutting absorbs many of Vallon's old lieutenants into his organization, keeping them from rising against him. And for many years, the Butcher's organization is the only real game in town. We even see Boss Tweed (Jim Broadbent) of the Tammany Hall organization forming an alliance with Cutting: Cutting turns out the vote, Tweed pays him handsomely for it and provides patronage jobs.

Much of the film's plot focuses on the rise of young Amsterdam (Leonardo DiCaprio) in Cutting's regime. Unbeknown to Cutting, Amsterdam is actually the son of the slain Priest Vallon and secretly harbors a desire for revenge. The system slowly repolarizes, as Amsterdam true identity is revealed, he is promptly ousted from Cutting's group, and then he reorganizes the Dead Rabbits. In what might as well be a quote from Schattschneider, Amsterdam tells his lieutenants of the advantage of organization:

There’s more of us coming off the boats each day. I heard 15,000 Irish a week, and we’re afraid of the natives? Get all of us together, and we ain’t got a gang, we got an army. All we need’s a spark, right? Just a spark, something to wake us all up.

The film suggests that the central societal schism is, in one form or another, immigrants versus natives, and that party systems keep polarizing, falling, and then repolarizing around that same schism. As one key character, Monk McGinn (Brendan Gleeson), explains,

My father was killed in battle, too. In Ireland, in the streets, fighting those who would take as their privilege what could only be got and held by the decimation of a race. That war is a thousand years old and more. We never expected it to follow us here. It didn't. It was waiting for us when we landed.

This ancient system is brought to a sudden and violent end by the military during the 1863 draft riots. It is, in some ways, a dissatisfying ending to the old system that was so distinguished by chivalry, blood oaths, and paternalism. But the film's ending makes perfect sense -- the old system cannot be the one that guides a modern nation.

There's so much more to this film that I can't begin to get into here, but I'd recommend it for classes on parties and civil war history. It's just brilliant.

All of that, plus Daniel Day Lewis, is what makes the movie interesting. Unfortunately, it also has Leonardo Di Caprio, so I don't think it can really be considered good.

Don't hate him because he's beautiful.