Even more on NH polls

Responding to several worthwhile questions from Derek and Lidzville, I put together my own graph. Here, I've taken the difference between a CNN poll conducted two days before the NH primary and the actual results of the Democratic primary. (The CNN poll was pretty close to the average of polling organizations leading up to the primary.) 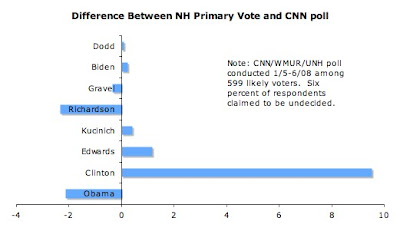 Once again, we see that Hillary Clinton did way better than expected, getting nearly 10 points more than the polls forecast. Obama and Richardson seem to have lost roughly two points each. That would certainly be within the poll's margin of error. So again, we see that the polls pretty much nailed the candidates' vote shares, with the exception of Clinton's, which they grossly underestimated.

That can't be the whole story, though, since it assumes that all the undecideds went to Clinton, which the exit polls tell us just isn't true. She only had a three-point advantage over Obama among those who decided on the last day. So something's still a bit screwy here. There really was a problem with the polling on the Democratic side.

I have a few suggestions:

I wonder if there was a difference in participation rates among supporters of the candidates. Perhaps the mischaracterization of Clinton's "moment" motivated her supporters to participate at higher rates than general. (You can see I don't know anything about the caucuses -- do they really get together in groups to vote?)

This goes hand in hand with the selection-effect problem that goes with the underrepresentation of the poor and less-educated democrats in polls.

It does seem that every problem had to err away from counting Clinton supporters in order to get such a large discrepancy from the polls predictions.

Odd. Perhaps people lie about supporting Clinton? They don't want to be seen as supporting her, but they've been won over. ;)