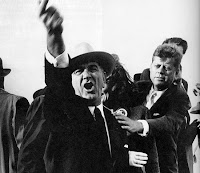 I've been speaking with friends and students about the choice Democrats face between Hillary Clinton and Barack Obama. To some extent, I think, you can compare this to the choice Democratic leaders faced in 1960 when they had to pick between Lyndon Johnson and John Kennedy. On the one hand, a powerful, experienced senator who could clearly get things done with Congress even if he lacked humility or much of a public speaking style. On the other, a charismatic but young, inexperienced senator who was a member of an ethnic group that had never been elected nationwide before yet could nonetheless inspire millions with his words.

Okay, the parallel isn't perfect -- Clinton isn't as powerful or experienced as LBJ was, and there's no reason to believe she'd be as effective in dealing with Congress as he was. After all, he pushed through Medicare, the Civil Rights Act, and the Voting Rights Act. And we saw how well she worked with Congress during her health care reform push in 1993-94. Not great. (I know, she wasn't president then, but if she can claim her time as First Lady as relevant White House experience, then so can I.)

But let's just say that you had a choice between Johnson and Kennedy. And, just for the sake of argument, let's leave out the Vietnam War, for which both presidents deserve culpability anyway. Do you go for Johnson and his impressive ability to push a meaningful agenda through Congress? Or Kennedy and his talent for inspirational words that make people feel proud to be American?

And if you can answer that, maybe it can tell you how to vote in 2008, when inspiration and accomplishment are again on the ballot.

Having had the opportunity to live through those times I sense that Johnson is given more credit than he deserves for passing all of that important legislation. The mood of the country after the Kennedy assassination was very conciliatory toward the Kennedy agenda. Perhaps none of those laws would have been enacted absent the untimely death of Kennedy; in my view it was a congressional tribute to the fallen leader. Having said that, among the key things a President can do is inspire young people to become involved in the discourse of the nation. It's time for the youth to capture the imagination of us all.

There are absolutely two different things! However, we lived in times when inspiration and accomplishment are again on the ballot. And our http://proofreading-services.org/proofreader.php will prove that!