Here's a nice, nonpartisan analysis of Obama's and McCains tax plans from the Urban Institute and Brookings. The summary:

Both John McCain and Barack Obama have proposed tax plans that would substantially increase the national debt over the next ten years, according to a newly updated analysis by the non-partisan Tax Policy Center. Compared to current law, TPC estimates the Obama plan would cut taxes by $2.9 trillion from 2009-2018. McCain would reduce taxes by nearly $4.2 trillion. Obama would give larger tax cuts to low- and moderate-income households and pay some of the cost by raising taxes on high-income taxpayers. In contrast, McCain would cut taxes across the board and give the biggest cuts to the highest-income households.

And the money shot: 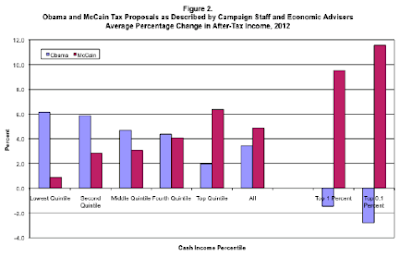 im here because of few cents for you. just dropping by.