I attended several APSA panels on race and gender this past weekend. I normally don't do that sort of thing. (That is, I rarely attend panels, and when I do, they're usually about state politics or parties or something.) Suddenly, race and gender seem salient to me. A lot of these panels featured interesting discussions about whether Hillary Clinton suffered more from sexism than Barack Obama suffered from racism during the recent primaries and caucuses.

Anyway, loyal readers may recall my analysis of African American candidates running for U.S. Senate or governor from 2002-06. I wanted to see if there was some kind of electoral "penalty" against black candidates in statewide contests. The results were somewhat inconclusive because there are simply so few cases. There were only four cases I could find in which an African American Democrat ran against a white Republican. In each of those, the African American ran about 1 to 2 points behind the "expected" vote (calculated by looking at the presidential vote, incumbency, the state's racial composition, etc.). This difference was not statistically significant, but again, it's only four cases.

So, this weekend, I was curious to see if there was any sort of female electoral penalty. I looked at the same set of races and found no consistent pattern. There are a lot more cases -- 45 in which a woman ran against a man (35 female Democrats, 10 female Republicans). However, the average penalty for women was almost precisely zero, a result that was identical across parties. Here's a histogram showing the difference between actual vote and expected vote for female candidates. Red shows Republican women, blue shows Democratic women. 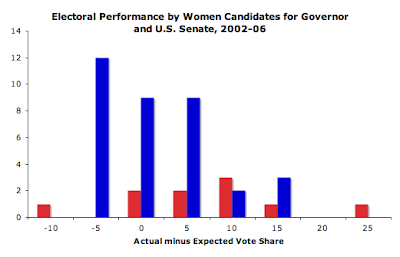 Most of the cases hover around zero, although there are a few outliers. On the low end was Sen. Lisa Murkowski (R-Alaska), who ran 13 points behind the expected vote for a GOP senator in Alaska in 2004 but still managed to retain her seat. At the upper end was Sen. Olympia Snowe (R-Maine), who won nearly 80 percent of the two-party vote, running 22 points ahead of the expected vote for a GOP senator in Maine in 2006. Republican women, interestingly, do slightly better than Republican men in elections, but that difference disappears when other statistical controls are used.

It would probably help this analysis to expand it to House elections. I felt it was appropriate to limit it to U.S. Senate and governor races for the analysis of African American candidates, since those are high visibility contests with lots of television advertising in which nearly all voters could be expected to know the race of the candidates. Voters can usually detect gender, however, simply by reading a candidate's name.

At any rate, we have here a little empirical data on who is "winning" the oppression olympics. Although we still need more data, there does seem to be a modest electoral penalty against African American candidates. No such penalty exists for women candidates. Of course, there are selection effects at work here, so I can't make any hard claims about causality. But take it as you will.

Kathryn Pearson and I have written a paper (currently under a *lengthy* review with AJPS) that explores the impact of gender in House elections. We find that women *do* perform worse than men, but only when one takes into account that women are actually *better* candidates on average--they are more likely to be experienced and to run in favorable districts, and they raise more money even when these first two things are controlled. So I wonder if your analysis would turn out differently after controlling for these sorts of factors? Might also be that our findings are limited to the House and don't apply to higher level office.

Interesting! I wouldn't be surprised to get similar findings from my dataset, if I had the time to gather the data you described, which I don't. Do you have a link for your current paper? Or is it still in the allegedly anonymous stage?