Today, for the first time in my life, there is no Edward M. Kennedy in the United States Senate. Others have eulogized him today far better than I can, but I just wanted to jot down a few thoughts.
The first time I saw Sen. Kennedy in person was in the fall of 1988 at an Oakland church, where he was speaking on behalf of Michael Dukakis' presidential campaign. He was an enjoyable and energetic speaker, but my main memory of the event is a seemingly deranged man moving aside a velvet rope and making a run for Kennedy on the dais. He was quickly grabbed by security and taken outside, and Kennedy laughed it off. But it scared the hell out of me. I remember thinking just how dangerous it was to be a politician, and one named Kennedy in particular.
The last time I saw him was one year ago today, when he gave his passionate address in support of Barack Obama on the opening day of the Democratic National Convention. Here's a picture I took: 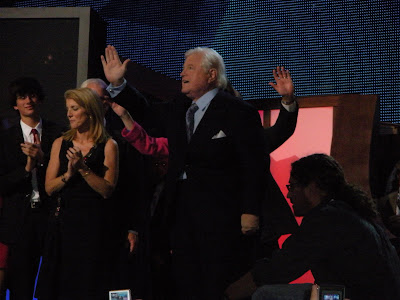 A final note: a distant cousin of mine just unearthed a letter that Kennedy sent to my grandparents, who apparently had donated to Kennedy's 1980 presidential campaign. I'm posting it below. Note that it includes a personal signature. I tried searching for the donation but couldn't find any record of it, suggesting that my grandparents gave less than $200 to the campaign. That such a modest donation would have earned a personal signature is a real testament to Kennedy's style. 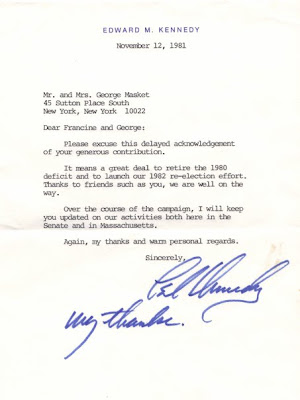 slightly off topic but: do you have any idea why he and carter hated each other's guts so much?

I always figured it was career-based rather than personal. Kennedy rightly assumed that Carter couldn't win in 1980 and thought he could take the nomination from him. And Carter subsequently blamed Kennedy for taking the presidency away from him.

But I wasn't clear why, if Kennedy had presidential ambitions, he chose that time to run. Maybe '76 was still too close to Chappaquiddick. Maybe in '88 he thought Dems were angry at him about '80. Maybe in '92 he figured Bush would get reelected. I don't know. But it seems like there were plenty of other good years to run.