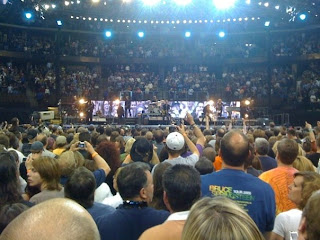 Caught Springsteen at the Pepsi Center last night (actual iPhone photo at left). Damn, what a show. He played a few of the new songs, and a whole mess of classics. Also, in what apparently has become a recent tradition, several audience members brought signs with the names of songs on them. He grabbed the signs and used them as a playlist. Very classy.
I was reflecting yesterday on my first Springsteen show -- 1985 at the LA Coliseum with my friend Sheri. We smugly enjoyed the music and derided the awful yuppies surrounding us. I am well aware that I am now one of those awful yuppies. On the other hand, there just weren't too many teenagers there to deride me last night. Bruce isn't pulling in too many new folks, and although his fans are legion, we're aging. But if he can rock for 3 hours a mile above sea level at the age of 59, I can at least show up and dance.
A poignant 1986 Bloom County cartoon can be seen below.

Can't read the Bloom County comic. Can you give the link? If it's already there it doesn't work.

-Springsteen in full Old-Time-Gospel-Hour preacher mode, just before segueing into a set of hard-times classics that backstreets.com is referring to as the "Recession Trilogy": Seeds-Johnny 99-Youngstown.

I love the recession trilogy!

Oh, and according to Backstrets, we were, in the Boss' words, "the best crowd of the tour so far."