Well, the results of last night's caucuses haven't been completely tabulated, but that shouldn't stop me from making inferences, should it?  Don't answer that.

Okay, on the Democratic side, here's what the county map looks like.  I have calculated Romanoff's share of the Romanoff + Bennet vote, ignoring the uncommitted for now.  Darker blue counties are those in which Romanoff did better.  The data come from here. 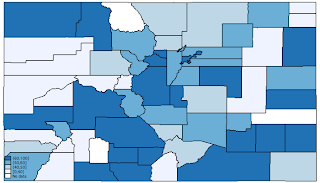 Now, the completely white counties are ones in which we don't yet have numbers (including, notably, Pueblo), so ignore those for now.  I'll update later.  But what we do see is that Romanoff did well in the Denver metro area and even better in some of the central and southern counties.  Bennet's areas of strength appear to be the northern plains areas and the western slope counties near Grand Junction.  Regression analysis shows that Bennet did better in counties with a higher percentage of college-educated residents, while Romanoff did better in wealthier counties.
Over on the Republican side, I calculated Jane Norton's share of the Norton + Buck vote, ignoring the uncommitted and supporters of other candidates.  Darker red counties are those in which Norton did better.  The data come from here. 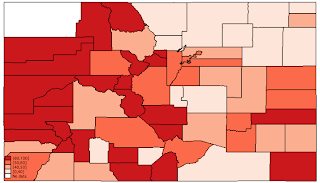 This map shows a strong regional pattern, with Norton doing much better than Buck in the western counties and Buck dominating the eastern plains.  This may partially represent the candidates' upbringings: Norton is from Grand Junction originally, and Buck is the Weld County D.A. and has a long family history in Greeley.  So she's the western slope candidate and he's the eastern plains one (whereas we see less of a geographic pattern on the Democratic side with both candidates coming from Denver).  Regression analysis shows that Buck did significantly better in counties with a higher percentage of Evangelical Christians, although no other major demographic distinction between the candidates' supporters turns up.
Update: Dem map updated with Pueblo County data.
Later update: Maps changed with newer results as of 3/19.  Color breaks now 0-40, 40-50, 50-60, and 60-100.
(Cross-posted at ColoradoPols and Huffington Post.)

I thought you had to win the vote at the state assemblies to get top line on the primary ballot?

What happened to the Obama Machine that supposedly is working for Bennet?

Would you expect Obama Democrats to start funding Romanoff for any reason?

Do you really think caucus participants are that well informed? It is not my impression on the GOP side.

It is interesting that despite early and aggressive support by Obama; Bennet still was so far behind Romanoff.

Yes you still have to win at the county assembly and state assembly too I believe to make the top line on the primary ballot. Interesting/sad that that is considered such an advantage because so many people will just vote down the party line, don't bother to do much research and will pick the first one they come to.

A lot of Obama Democrats supported Romanoff at the caucuses so yes I would expect them to back that up with bucks. Not so sure of the ones who didn't come to caucus.

I think, from the Dem side, you'd have to be pretty well informed or you wouldn't even have BEEN a caucus participant. We had 10% of the numbers that we had in 2008 and still that was 5X the numbers we've seen in previous years.

The thing is that most people I talked to on either side of the Bennet v Romanoff chasm (kidding) really thought they were both very good candidates and we'd be happy to put either one of them up against the republican candidate and happy to have either one of them serve us in the U.S. Senate.

I don't know that Bennet did all that poorly. The caucuses are dominated by the longstanding party activists. These are the people who know Romanoff and have worked with him over the years -- they don't really know Bennet. So the fact Bennet got over 40% and kept Romanoff to right around 50% may be a testament to Obama's influence or to Bennet's own work in the Senate. Bennet has vastly more money than Romanoff, but that doesn't really help much with the caucuses -- there's been very little advertising thus far.

Jackie, yes, there are some people who will simply vote based on ballot order, but their numbers aren't huge. Top ballot placement is probably worth about one percent of the vote or so. Keep in mind that the caucus winner usually does not end up winning the primary.

Jackie is right that you'd have to be pretty well informed to even attend the caucus -- most folks probably didn't even know they were happening until it was all over. I'm not claiming that GOP or Democratic caucus attendees are brighter than other Coloradans, but if you gave them some sort of political quiz, they'd do much better than the average person. By definition, they care much more about politics.