On the value of street protest


#HCR passage will prove, once again, that street protests are pretty ineffective. It was time for Cons to learn that lesson

I'm not sure they were totally ineffective here.  No, the protests didn't stop health reform from passing, but they did slow it down for a while, and they reinforced total GOP opposition (although that might have happened anyway).

The inevitable comparison is to the civil rights movement.  We often credit protests for helping that movement succeed.  Why can't other groups do that today? 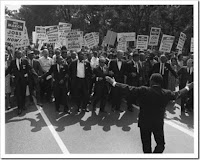 Well, for one thing, most protests we see just don't look like the civil rights movement.  Think of the 1963 march on Washington, which took place on a work day and involved hundreds of thousands of well dressed people all carrying professionally made signs showing just a handful of pre-approved messages.  Think of the Selma march or the lunch counter sit-ins, which involved substantial physical risk for participants.

Today's protests, whether it's tea partiers gathered in opposition to taxation or something or anti-war types opposing the invasion of Iraq, don't have nearly that level of discipline or physical risk.  There's no reason for an observer to admire anything that these protesters are doing.  They're simply getting together and speaking because something is going on that they don't like and they don't want to keep silent about it.  That's certainly fine and understandable, but it's hard to see how that changes minds.

i'm glad the tea party protests didn't make a huge difference, and disappointed the anti-war protests didn't keep us out of iraq. but i am not ready to write off all street protests. small fringe protests might not be effective, but huge well-organized ones very well may be. for instance the one i think all 95% of us non-elites should stage to bring down capitalism. just an idea. :)

Or look at the immigration protests on Sunday which easily tripled the number of marchers than the tea party types bussed in. Did they get even 1/10th the coverage?

The protest march is no longer about setting an agenda. It's background for a live report, and twitter fodder for people with an agenda.