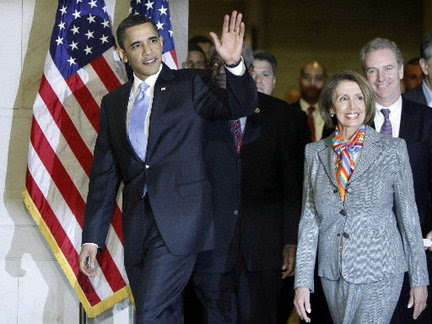 Substantial health reform has passed.  Add this to the events I didn't think I'd live to see, along with the Berlin Wall coming down.

So what does this mean?  My impression is that the politics of health reform have been overhyped somewhat and the policy underhyped.  In terms of the politics, I just don't think it will have an enormous impact on the November elections.  Midterm elections are affected in large part by the state of the economy and the president's popularity (which is, in turn, strongly affected by the economy).  Now, the passage of a signature piece of legislation surely could affect the president's popularity, but probably not by a ton.  Everyone already knew where Obama stood on this issue.  Republicans would be no more impressed by him if he failed to pass something he campaigned on.  Passage might affect individual House races, of course -- Nate Silver estimates that Colorado's own Betsy Markey has taken the biggest risk tonight.  But again, it's hard to be sure.  Markey's reelection was always going to be a difficult one, and while she certainly angered some constituents tonight, she also won a lot of love from the left, which could translate into donations and election labor.

What about the future?  As I mentioned previously, expansions of the social safety net tend to start off controversial but quickly become broadly accepted.  I expect this health care reform will follow the same path.  But that doesn't mean Democrats are guaranteed years of victories.  As Bernstein points out,

So while I don't think tonight will have an extraordinary effect on elections in the near or distant future, I do think this will have a profound impact on public policy.  Even if this bill seems watered-down to you, realize that from this point forward, the federal government is responsible for making sure people have health insurance.  The question is no longer whether government should do it; it's whether it's doing it well enough.  I heard somewhere that the two major votes tonight were symbolic ordered that way -- first they passed health reform, then they passed reconciliation to improve it.  This is the biggest fundamental change in the relationship between Washington and the American people since Lyndon Johnson was in the White House.

How did it happen?  Speaker Pelosi deserves a lot of credit for pushing this thing through at a time when many Democratic leaders seemed to be getting weak-kneed after Scott Brown's victory.  Whatever you think of her politically or personally, she really showed her legislative tactical skills here.  Of course, President Obama deserves credit for making this a priority, for learning the lessons of the Clinton administration, and for putting together a complex and clever strategy for making this happen.  Of course, we shouldn't ignore the fact that Democrats had very large and ideologically coherent majorities in both houses.  (Democrats may wish to say a quiet thanks to President Bush, whose profound and longstanding unpopularity helped bring about this condition.)

So Democratic leaders should enjoy a night of celebration and go get totally stupaked.  And then, on to the next thing.

Thanks for posting on this; I'd been wondering what you were thinking. I'd also love to see any thoughts you have on how the "grassroots" backlash on the right develops, and whether it matters on any level.

Back at it today. Good luck with your new classes. I'm still polishing my darn syllabus.

? The votes weren't ordered symbolically. You can't vote on on changes to a bill until you've actually passed the bill.