John Sides has a few posts recently (here and here) in which he cites research by Eric McGhee at the Public Policy Institute of California on the effect of primary systems on the partisanship of elected officials. (Disclosure: Eric and I are working on a conference paper together on this topic.)  His findings suggest that the effect of moving from a closed to an open primary is surprisingly modest.  He further notes that during California's brief experiment with the blanket primary, politicians were no less polarized and the budget was still passed late.

Here's another way to look at this issue.  In the graph below, I've plotted Jerry Wright's data on legislative partisanship in each of the state legislatures during the 1999-2000 session along the vertical axis.  The horizontal axis is the type of primary the state was using at the time, going from most to least restrictive. 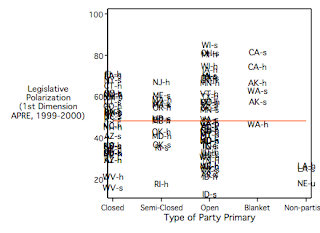 Now, notably, the states at the far right (Louisiana with its jungle or top-two primary and Nebraska with its nonpartisan elections) are among the least polarized legislatures.  However, the regression line is nonetheless flat.  We'd expect polarization to decrease as primaries become more open to independents -- they don't.  Indeed, many of the states employing the blanket primary at the time prove relatively partisan.  And Wisconsin and Ohio, which then employed open primaries, have among the most polarized legislatures in the country.  Of course, this is a pretty simple bivariate look at this problem, but one would expect to see more of an effect than this.

So what will happen if California adopts Proposition 14, the top-two primary, this spring?  Well, I suppose that depends on just how representative we think Louisiana is.  Does the Cajun State have a relatively moderate legislature because of its primary system, because of its unusual political culture, or because of other odd institutional rules in place there?  Given that it's hard to separate those out, and given that other evidence about primaries and partisanship suggests little relationship between the two, I doubt the initiative would have anything close to the impact its backers suggest.

I'm wondering if anyone has recent data on Washington's state legislature, the members of whom have been elected through a top-two primary since 2006.  Since Washington has been among the more polarized legislatures in recent years, it will be interesting to see if the chamber has been de-polarizing.

In this context, you'd expect the primary axis of conflict to be something other than an ideological policy dimension*, and you'd expect the content of that dimension to wobble around a lot as the leaders assemble different coalitions for different bills. In both cases, there wouldn't be much structure there for nominate or ideal to pick out.

*I know this doesn't fit LA too well since the ~25% that are Republicans are gathered in sort-of opposition to the Democrats, but still.